The green frying peppers are especially abundant and popular in local cooking. They’re fried whole and served as a tapa or side with grilled meat. They’re a basic ingredient in sofrito. Chopped raw peppers go into gazpacho and into pipirrana and piriñaca salads. They’re even used for stuffing.

These peppers are thin skinned and thin fleshed. Their crisp texture makes them ideal for using raw in salads. Many are twisted, even kinky. Their flavor is bittersweet and fruity, not hot.

I decided to stuff a bunch of these green peppers. Instead of the usual meat or meat plus ham stuffing, I chose a filling of canned bonito. Bonito del norte is white albacore tuna. Canned in olive oil, bonito has completely replaced canned tuna—endangered blue-fin—in my cupboard. This is an easy stuffing mixture to make with what you’ve got in the pantry. For stuffing, choose the less kinky specimens of peppers.

Once filled, the peppers are lightly fried in olive oil before being finished in a fresh tomato sauce. Frying adds flavor and blisters the peppers’ thin skin, which all but disappears during cooking. 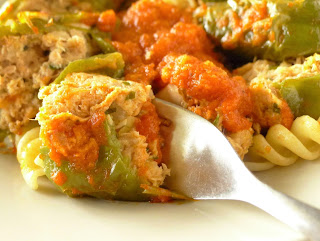 Remove stems and seeds from the peppers. Press the stem in until it breaks free. Pull the stem out with the seeds. Shake out remaining seeds.

Place the bread crumbs in a small bowl and add the milk to soften them.

Heat 1 tablespoon oil in a skillet and sauté the onion on medium heat until softened, 5 minutes. Squeeze out the breadcrumbs, discarding the milk. Add the bread to the skillet. Add 3 tablespoons of the tomato sauce and the tuna. Remove from heat. Add the parsley and season with salt and pepper. (Salt may not be needed, as canned tuna is fairly salty.) Stir in the beaten egg. Let the mixture cool.

Fill the peppers with the tuna stuffing mixture. Use a spoon or skewer to push it in.

Heat enough oil to cover the bottom of a deep skillet. Fry the peppers, turning, until they are lightly browned and blistered on all sides. Remove. Pour off remaining oil.

Serve the peppers hot or room temperature, with pasta, if desired.

No need to peel the tomatoes before making the sauce, as later it gets pureed and sieved. The sauce keeps, covered and refrigerated, up to a week.

Heat the oil in a heavy saucepan and sauté the onion, carrot and garlic. Add the tomatoes, wine and salt and pepper. Bring to a boil, then reduce heat and simmer the sauce, partially covered, until thick, 30 minutes.

Puree the sauce in a blender and pass it through a sieve, discarding the skins and seeds.