I pulled on gloves to search the depths of the freezer, hoping to find more of last summer’s garden tomatoes. In the front I discovered two big snowballs that grandson Leo brought back from the mountaintop last week.  Sure enough, way in the back was the last bag of those marvelous, sweet tomatoes. And, what’s this? A lamb shank. And another. More, six of them. Frozen assets.

For the past eight or ten months, every time I bought a leg of lamb, I had the butcher cut off the shank end at the joint. Individually wrapped and frozen, they added up to a great winter meal.


The recipe comes from my cookbook, My Kitchen in Spain, where it appears as “Moorish Lamb Stew with Prunes,” made with cubes of lamb rather than shanks. “Moorish” for the subtle blend of spices, more characteristic of medieval cooking than traditional Spanish home cooking.

Back in the day (Oct. 16, 2002), the recipe appeared in the New York Times in an article by Amanda Hesser (founder of  Food 52 web site and food community, then a NY Times writer) about pairing Rioja wine with food. Here’s what she wrote:

“Lamb is braised with lemon zest, cloves, cinnamon and saffron. At the very end, prunes plumped in muscatel are added for yet more complexity. The Rioja will not cower.”

So, you know what wine to choose with the shanks—a red Rioja, crianza or reserva.


My lamb shanks varied in shape and weight. The largest were very meaty and weighed about 13 ounces. Smaller ones, foreleg shanks, were about 7 ounces. One shank makes one serving.

I also found a packet of lamb bones in the freezer, saved from boning-out a leg of lamb. I used them to make stock. If lamb stock is not an option, use chicken stock. Taste the stock when adding to the shanks and add salt if needed.

You can serve the lamb shanks straight from the pan in which they cooked. Or, remove them to a heated serving platter and sieve or puree the cooking liquid. Serve the sauce separately. You can also braise the lamb and, once cool enough to handle, cut the meat from the bones. Reheat in the sauce.

Sprinkle the lamb shanks with salt and pepper and allow them to come to room temperature. Heat 2 tablespoons of the oil in an oven-safe pan. Brown the meat on medium heat, turning the shanks to brown on all sides. Remove them.

Add remaining 1 tablespoon of oil and the onion and carrot to the pan. Cook on medium heat, stirring frequently, until onion is quite brown, about 15 minutes. Stir in the crushed saffron and toast it 1 minute.

Lightly crush the garlic cloves with the flat side of a knife and add them, unpeeled, to the pan.
Add the lemon zest, cinnamon, cloves, ginger, lemon juice, wine and 2 cups of the stock. (Taste the stock for seasoning and add additional salt, if needed.) Place the lamb shanks in the pan in one layer. Cover with a lid or foil and carefully transfer the pan to the oven.

Bake 45 minutes. Turn the lamb shanks. Add additional stock if needed. Cover and return the pan to the oven until meat is very tender, 45 minutes longer. Add the prunes and bake 15 minutes more.

Discard the cinnamon stick and whole garlic cloves. The lamb can be served straight from the pan or, if desired, transferred to a heated serving platter and the remaining pan juices sieved. Place the prunes around the meat and spoon some of the sauce over it. Pass remaining sauce separately. Serve the lamb shanks with a sprinkling of chopped mint. 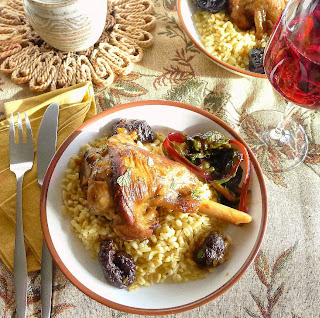