MY KITCHEN IN SPAIN GETS A REVAMP!

Part way through my kitchen renovations, I am panicking. We just set the new oven in its niche and I realize it’s almost at floor level. What to do now? Find another location? Raise the stovetop? How did I miscalculate so badly?


Luckily, I’ve got my revamper-in-chief, Peter Nielsen, to help me solve this and some other problems. Peter is an artist who earns a living by doing electrical work, plumbing, carpentry, masonry, and much more.


When I built my house in 1972, I custom-designed my kitchen to the specifications of the times. I had a dinky little Spanish gas stove, so I built my counter tops to line up with it, only 34 inches high and 19 inches deep. That, I soon realized, was not enough counter space to roll out a pie crust. Peter built me a center island to house a dishwasher and extend the counter space.


Ten years later, I acquired a big American stove, a MagicChef, purchased second-hand from an American military family leaving the US naval base at Rota (Cádiz, on the Atlantic coast of southern Spain). That necessitated knocking out some cabinet tops. The new stove stuck up much higher than my counters.

That stove has served me well through the years—family meals, dinner parties and recipe testing for eight cookbooks.  When the thermostat stopped functioning, I got an oven thermometer so I could regulate temperatures. Clogged gas valves can’t easily be cleaned, as the tubing becomes brittle. That means I can’t get burners hot enough for good wok cooking. And, some invasive varmint ripped most of the insulation out of the oven, so it’s seriously inefficient to heat.

Cooking with gas is swell--but, as I get older, lugging butane gas tanks is a pain. (I got rid of gas hot water heater when I installed solar hot water system.) The new electric oven is way smaller than the old one. But, gone are the days when I roast whole turkeys with all the trimmings for eight to ten people. The induction cooktop only has three “burners.” But, hey, I can’t remember when I last needed four burners at the same time.

During the renovations, we’ve moved the clunky gas stove into the dining room so I can still put meals on the table. With the kitchen en obra, in the works, I’m not doing a lot of cooking. 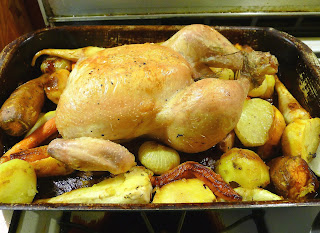 Peter Nielsen’s web site http://peteratplay.com/ shows samples of his art and photography. His fix-it and build-it artistry is on show in many homes in my area. My neighbor, Jan, wants to clone Peter. That's how important he is in our lives.
Posted by JANET MENDEL at 8:23 PM