SUMMER’S DONE; TURN ON THE OVEN

I have a house rule—no turning on the oven from June till September. With the first day of fall and a somewhat cooler kitchen, I am so excited to roast a chicken again!

When my kids were growing up, roast chicken was a favorite easy, weeknight meal. While the boys were doing homework and baths, I would bung a whole, small chicken in the oven with nothing more than a scattering of thyme and chopped garlic, salt and pepper. In a little more than an hour, dinner was on the table.

Now, I seek out free-range chicken, much larger than those battery-raised supermarket birds. They’re much more expensive and take longer to roast, so chicken is a special dish.

The first day of fall also marks my switch from the chilled rosado (rosé wine) that I favour in torrid summer weather to tinto (red wine). As I select a robust Rioja crianza—a red wine from La Rioja with a little time on oak (this one is tempranillo with a little garnacha), I recall that the most famous dish of La Rioja was the one that didn’t get eaten--a roast chicken set before the town magistrate of Santo Domingo de la Calzada back in the 14th century.

The story goes that a youth who was traveling with his family on a pilgrimage to the holy shrine of Santiago stopped over at an inn in Santo Domingo and was framed by a scheming girl, possibly because he spurned her advances.

The girl placed a piece of silver in his rucksack, then falsely accused the boy of thievery. He was sentenced and hanged for the crime. But his parents heard his voice calling out from the gallows, saying he was still alive.

They rushed to tell the town magistrate, who was just sitting down to a dinner of roast chicken. He dismissed their claims, “Your son is as alive as this chicken that I am about to eat.” With that the chicken hopped from the plate and began clucking and strutting about. The boy, indeed, was still alive and was released. The saying goes, “Santo Domingo de la Calzada, que cantó la gallina despues de asada,” where “the chicken cackled after it was roasted.”

La Rioja is also known for vivid displays of red choricero peppers hung from balconies to dry in the fall. These peppers are used for flavoring the region’s chorizo sausages. That gives me the idea to use chunks of chorizo to flavor the roast chicken.

And, now that I’ve turned on the oven, I might as well roast some sweet potatoes, the first of the season.

Use chorizo link sausage, the slightly soft type that is best for grilling and stewing. (Dry-cured chorizo is best sliced as a cold-cut rather than used in cooking.) If chorizo is not available, use a spoonful of pimentón (paprika) mixed with olive oil for basting the chicken.

The pan drippings with chorizo fat are good spooned over potatoes or other vegetables.

Sprinkle the chicken inside and out with salt and pepper. Allow to stand 30 minutes.

Tie the bay leaves, thyme and rosemary into a bouquet and insert in the chicken’s cavity with the lemon slice and (unpeeled) garlic.

Slice the chorizo. Heat oil in a small skillet and fry the chorizo, turning to brown both sides. Tilt the pan and skim out the chorizo. Save the fat in the pan.

Stuff the chorizo into the chicken cavity with the herbs. Tie the legs together and set in a roasting pan. Brush the chicken all over with the fat rendered from the chorizo. Roast 30 minutes.

Baste the chicken again with pan drippings. Pour over the wine. Roast chicken 30 minutes more or until juices run clear.

Remove chicken to a platter or cutting board and allow to rest 15 minutes before carving. Discard the bunch of herbs. Place the chorizo on serving platter with the chicken. Peel the garlic cloves and use them as garnish. Serve the pan juices in a separate bowl. 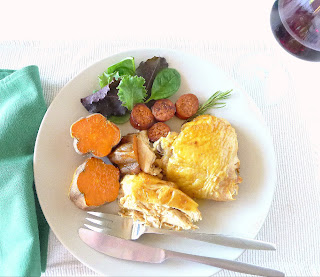 and, for Potatoes, La Rioja Style (with chorizo) http://mykitcheninspain.blogspot.com.es/2010/04/potatoes-from-canary-islands-to-la.html