A SLOW-COOKED STEW FOR DARKENING DAYS


As the days grow shorter on the countdown to the winter solstice, I want bright candles, flickering flames in the fireplace, twinkling lights on a holiday tree and a pot of stew bubbling on the stove.

Spain has lots of stews and braised dishes that will fill the bill. Many are made with economical cuts of meat that need slow cooking to render them tender. In the process, they also take on flavor, of wine, herbs, vegetables and sausages with which they cook.

This dish from La Mancha derives from the rustic shepherds’ caldereta, or iron stew pot, in which meals were cooked over embers. At its most basic, the stew was eaten straight from the pot, with bread for sopping the gravy. Other versions use either the lamb liver, grilled and mashed, or ground almonds, pine nuts, or walnuts to thicken the sauce. I’ve used almonds, ground finely in the blender with the peppers to make a smooth gravy for the lamb.

If baby lamb is used, it’s usually hacked into chunks, bones and all. For larger cuts of lamb, use boneless pieces from leg or shoulder. Goat meat can be substituted for the lamb.


Ñoras are plum-sized, dried bitter-sweet chiles. After cooking, the soft flesh is scraped from the insides of the peppers. Mild California chile pods are a possible substitute, though they are not quite as fleshy as the ñora. Otherwise use a spoonful of sweet pimentón. Use a little hot chile in addition to the mild. A piece of red bell pepper adds to the ruddy-red color of the gravy. I like to add some smoky Pimentón de la Vera to make up for the shepherds’ wood fire smoke. (Count ‘em—that’s four kinds of peppers.) The recipe also calls for sun-dried tomatoes, an ingredient used in La Mancha. If they are not available, use a spoonful of tomato concentrate.

Serve the lamb and red pepper gravy with Mashed Potatoes with Green Garlic (that recipe is here), rice pilaf or cous cous.

Trim lamb of excess fat. Cut it into chunks of approximately 2 inches square. Sprinkle the pieces of lamb liberally with salt and pepper and allow to stand at room temperature for 1 hour.

Heat the oil in a large stew pot or lidded cazuela and sauté the sliced onions until lightly browned, 6 to 8 minutes. Put in the pieces of meat and turn them in the oil for a few minutes. They do not need to brown, only to lose their pink color.

Add the wine and 3 cups of water or stock. Bring to a boil, then cover and simmer until meat is very tender, 1 to 1 ½ hours.

Lift the pieces of meat out of the cooking liquid with any vegetables clinging to them and set aside, covered tightly. Skim off fat from the top of liquid remaining in pot.

Place a strainer over a heatproof bowl and pour the liquid through it. Discard the cayenne chile and bay leaves. Lift out the pieces of ñora. Use a spoon to scrape the pulp from the inside of the ñoras or chile pods. Discard the skins and put the pulp in a blender or food processor. Scrape the pulp from the piece of bell pepper and discard the skin. Add the pulp to the blender with some of the onions, tomatoes and garlics remaining in the strainer.

Add the almonds to the blender with the Pimentón de la Vera and 1 cup of the strained liquid. Blend or process until the almonds are ground to a smooth paste.

Return the liquid to the stew pot and add the almond mixture. Bring to a boil, stirring. Return the lamb to the pot and cook gently 20 minutes longer. 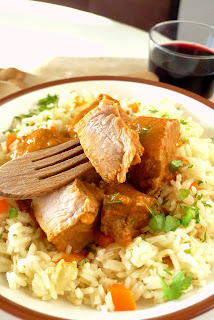 To Char-Roast a Head of Garlic

Spear the head of garlic on a fork or grasp it with tongs (protect hands with an oven mitt) and hold over a gas flame, or put under the broiler. Turn the garlic until it is charred on all sides. Peel the garlic cloves, rinse them in water, and add them to the stew to continue cooking. 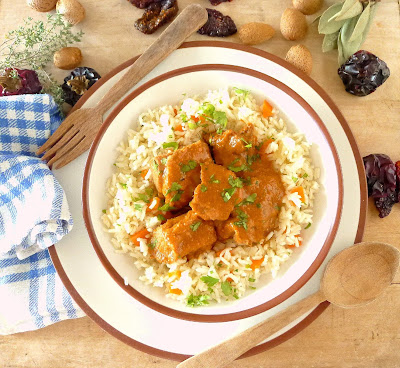 Here are links to some other hearty winter stews.