A good rain this week has fattened the olives on my trees. The local olive mill has opened the 2015 campaign. Time to start the picking! 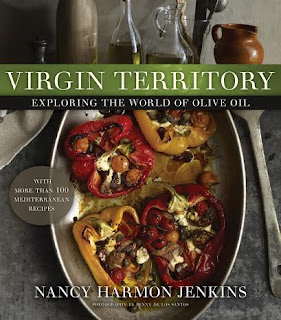 I am reading with enormous interest Virgin Territory, Exploring the World of Olive Oil, by Nancy Harmon Jenkins (Houghton Mifflin Harcourt; 2015). Forty years ago she bought an abandoned farm high up in the hills of eastern Tuscany, (Italy) near the border with Umbria. A dozen or so abandoned olive trees came with the property. She eventually added 150 young trees and now makes superb green-gold, Tuscan extra-virgin.

Nancy’s experiences discovering olive oil roughly parallel my own. I bought my hillside land in southern Spain about 40 years ago too. The olive grove consists of only 20 trees, so the yield is never enough to bring home my “own” oil. At the mill, I exchange my olives for new oil. But, like Nancy, I am a dedicated convert to extra virgin olive oil.

Virgin Territory tells the olive oil story—the history and mythology, how olives are cultivated and how the oil is produced, how quality is affected at every step of its production, the health aspects—but it is told from Nancy’s personal perspective, as she grows her trees, picks them and takes the olives to the mill (coming home to prepare Tuscan Bean and Farro Soup for the Olive Harvest).

“The thrill of that first real harvest, and every harvest since, did more than anything else to teach me about olive oil,” writes Nancy Jenkins. “There is nothing in my copious library of aromas and flavors that can match the first taste of our new oil as it flows from our own crushed olives.

“In the end it’s worth it. In 2012 we brought home 120 beautiful liters of unfiltered oil, golden green with flashes of deeper color, so highly perfumed that I felt like rubbing it on my arms, dabbing it behind my ears, and drinking it. I got my first real taste of the new oil by lavishly slopping some of it over a slice of bread that had been toasted over an open fire and rubbed with a cut clove of garlic.”

Virgin Territory describes olive oil production in Spain, Italy and other Mediterranean countries. Nancy makes the point that, until recent years, the quality of oil in those countries was generally pretty terrible, “rancid and fusty,” because of the manner of picking, storing and milling.

“Our labor, like that of most producers of premium olive oil, is all by hand.” She offers a lot of detail about how time of harvest affects flavor and notes that quality oil invariably comes from early-harvest olives.

Describing the process by which olive oil is produced, the author explains what determines the quality of an extra-virgin olive oil: Time, meaning speed in harvesting, transporting and milling, and temperature of milling (preferably below 27ºC / 80ºF). She is partial to the modern continuous-cycle milling over the traditional crush-and-press system, as it exposes olive pulp to less light, heat and atmosphere, the enemies of high-quality olive oil.

In the chapter “What is Extra-Virgin Anyway and Why Should You (or I) Care?” Nancy gets down to definition (oil extracted from olives solely by mechanical or other physical means) and what it means in practical terms. Fruitiness, bitterness, and pungency—professional tasters, she says, recognize many different flavors, most of which are positive traits in extra-virgin oils.

Flavor in olive oil is an ever-changing, ever-intriguing subject. And, the best way to experience it is through tasting a gamut of four to six oils. She tells you how to set up your own olive oil tasting—way more than just dipping bread in saucers of oil!

Although more high-quality olive oil is available today, Nancy states, there is still “a vast ocean of bad and even fraudulent oil.”

The best solution to the problem of fraudulent oil, Nancy says, is education—of consumers, importers, shopkeepers, chefs, restaurateurs and every other link in the long distribution chain. Consumers need to understand what good, fresh olive oil tastes like. “Just as you would return rotten apples or corked wine, so should you return rancid olive oil to the place where you bought it and demand a refund or a replacement.”

The book offers sound advice on how to choose oil, what to look for on labels. Despite antioxidant polyphenols, olive oil is extremely fragile, subject to deterioration from heat and light exposure.

The first third of the Virgin Territory is devoted to the olive oil story, past, present and future; mythology and actuality. The remainder is filled with terrific recipes. Nancy, who has lived and traveled extensively in Spain, includes a smattering of Spanish recipes. Gazpacho, the Andalusian showcase for olive oil, opens the Soups chapter.

How do you cook with extra-virgin olive oil? Fearlessly! Generously!

She is out to lay low that myth, that extra-virgin has a smoke point too low for cooking. “It cannot be stated often enough or loudly enough: the smoke point of extra-virgin olive oil is not low. (between 380ºF and 410ºF). That is not a low smoking point.” Yes, you can deep-fry at between 350º and 365ºF. Oh, and I do!

Some of the recipes are already favorites that I cook over and over. Tapenade, falafel, shrimp tortillitas, pistou, risotto, tabbouleh, fish in saffron-almond sauce, muhammara (Turkish pepper and walnut sauce). Some I look forward to trying—Turkish Lentil and Bulgur Soup with Chile-Mint Garnish; Oven-Roasted Winter Squash with Pancetta and Rosemary; Potato and Caper Salad from the Island of Pantelleria; North African Seafood Tagine (good recipe to use my preserved lemons).

The only quibble I have with Nancy’s recipes is over her rendition of tortilla española, which she calls “Spain’s greatest gastronomic achievement.” Her recipe is traditional, calling for sliced potatoes to be fried in a large quantity of extra virgin olive oil. But she calls for “your black cast-iron skillet or similar heavy-duty frying pan.” Later she says to “flip the pan over,” to invert the tortilla onto a plate. I cannot imagine most cooks could flip a cast-iron skillet! I use a light-weight no-stick skillet or an old-fashioned one of thin rolled steel.

Most of the recipes come from Mediterranean kitchens, where cooks and chefs have been using olives and olive oil for thousands of years. But she includes some from elsewhere in the world, such as chicken curry from India or southern fried chicken from the US, just to prove that you don’t have to have a Mediterranean grandmother to cook with olive oil.

From so many great recipes, I chose one for cake! I don’t have a single olive-oil cake in my repertoire, and Nancy offers four different ones. I chose a quince cake—for quinces are in season as olives are ripening.

This recipe is from Virgin Territory by Nancy Harmon Jenkins. I have added my own kitchen notes in italic. The fine photos in the book are by Penny de los Santos. The photos of the quince cake here are mine.

This recipe, writes Nancy Harmon Jenkins, was inspired by one developed by her friend Patricia Shea, an artist and passionate baker who lives in Belfast, Maine. The quinces can be prepared several days in advance.

To make the quinces: Grate the zest of the lemon and set aside. Cut the lemon in half and add the juice of half the lemon to a bowl of cool water to make acidulated water for the quinces—it will keep them from turning brown.

Kitchen notes: Perhaps my Spanish quinces are a different variety, for two medium ones weighed more than 1 pound. I decided to slice them both, then, after placing the slices in the bottom of the cake pan, chop the remaining for incorporating into the cake batter. I also found that the quinces turned brown in the acidulated water but lightened again when cooked in the honey syrup.

Once all the quinces are sliced or chopped, combine the sugar, honey, ginger, and cardamom in a saucepan with the lemon zest and the juice of the second lemon half. Add 2 ½ cups water, bring to a simmer, and add all the quince, both sliced and chopped. Cover and simmer the quince for about 20 minutes, or until they are tender all the way through. Remove the quince from the syrup and set aside, separating the chopped pieces from the slices. Boil down the syrup until it is thick and syrupy. This can be done well ahead of time. Refrigerate both the quince and the syrup if you’re going to keep them longer than a couple of hours.

Notes: The recipe didn’t specify how long to cook the syrup or what the consistency should be. I boiled it 20 minutes (reduced to ¾ cup).

Butter the bottom and sides of a 9-inch springform pan. Line the bottom with parchment paper and butter the paper. Arrange the slices of quince in a pattern over the bottom of the cake pan.

Notes: The author says butter is best for greasing pans because it sticks to the sides of the pan better. But, I’m not buying butter just to grease a cake pan and find olive oil works just fine, whether brushed on or applied with fingers.

Sift together in a bowl the flour, ginger, cardamon, baking powder and salt.

Spoon the cake mixture over the quince slices, transfer the cake pan to the oven and bake for 40 to 50 minutes, until the cake is golden on top and pulling away from the sides of the pan.

Remove the cake from the oven and set on a wire rack to cool slightly, then invert it onto a serving platter. Remove the paper from the bottom (now the top), leaving the quince slices in place. If the reserved quince syrup hass gelled, set it over very low heat until it loosens, then spoon it over the top of the cake, letting it dribble down the sides, to make a glaze.