Belonging to the family Sciaenidae, the corvina in English is “croaker” or “meagre”. Also known as drums, for the noise they make under the water, these fish are lean, white, flaky and of excellent flavor. Don't you think corvina is a nicer name than meagre or croaker?

This fish is not abundant in the wild anymore, but my specimen, a whole one weighing more than two pounds (gutted and scaled), is of cría, raised in fish farms in Spain.

My favorite way to cook a whole fish is baked with potatoes and other vegetables. But since I’ve given you that recipe already (recipe + more about aquaculture in Spain ), I pulled up a recipe for a tumbet, a Mallorcan casserole with fish, potatoes and eggplant.

Once I decided what I was going to cook, I realized I would have to fillet the fish myself. Oh well, good to bone up on my filleting skills. With a good knife and patience, it’s really easy. 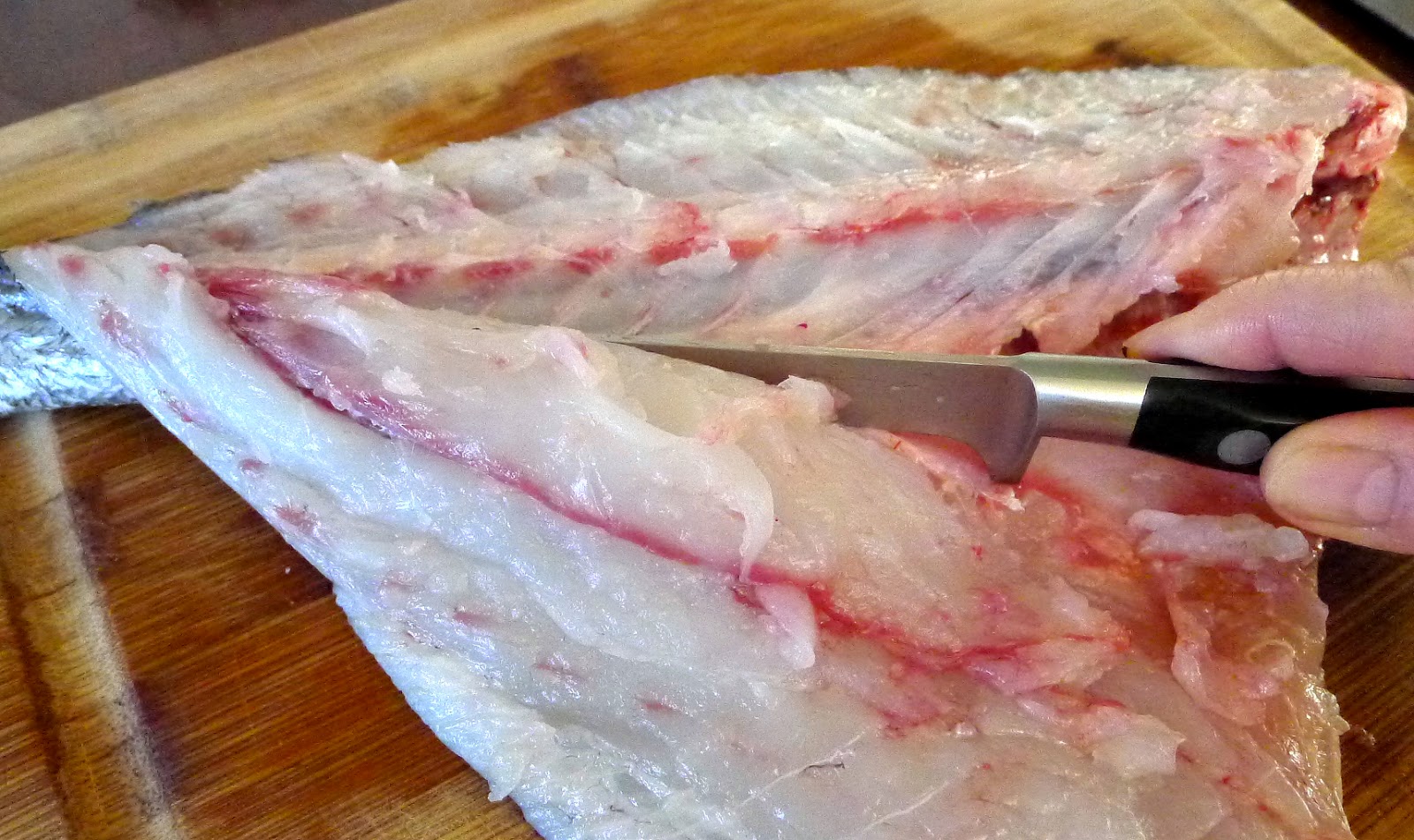 To fillet a fish: Starting from the head end, cut down along the backbone, keeping the knife as close to the spine as possible. Separate the top fillet at the tail. Turn the fish over and remove the second fillet in the same manner, cutting the flesh off the spine. Cut away side fins and attached bones. Use your fingers to locate any other bones. 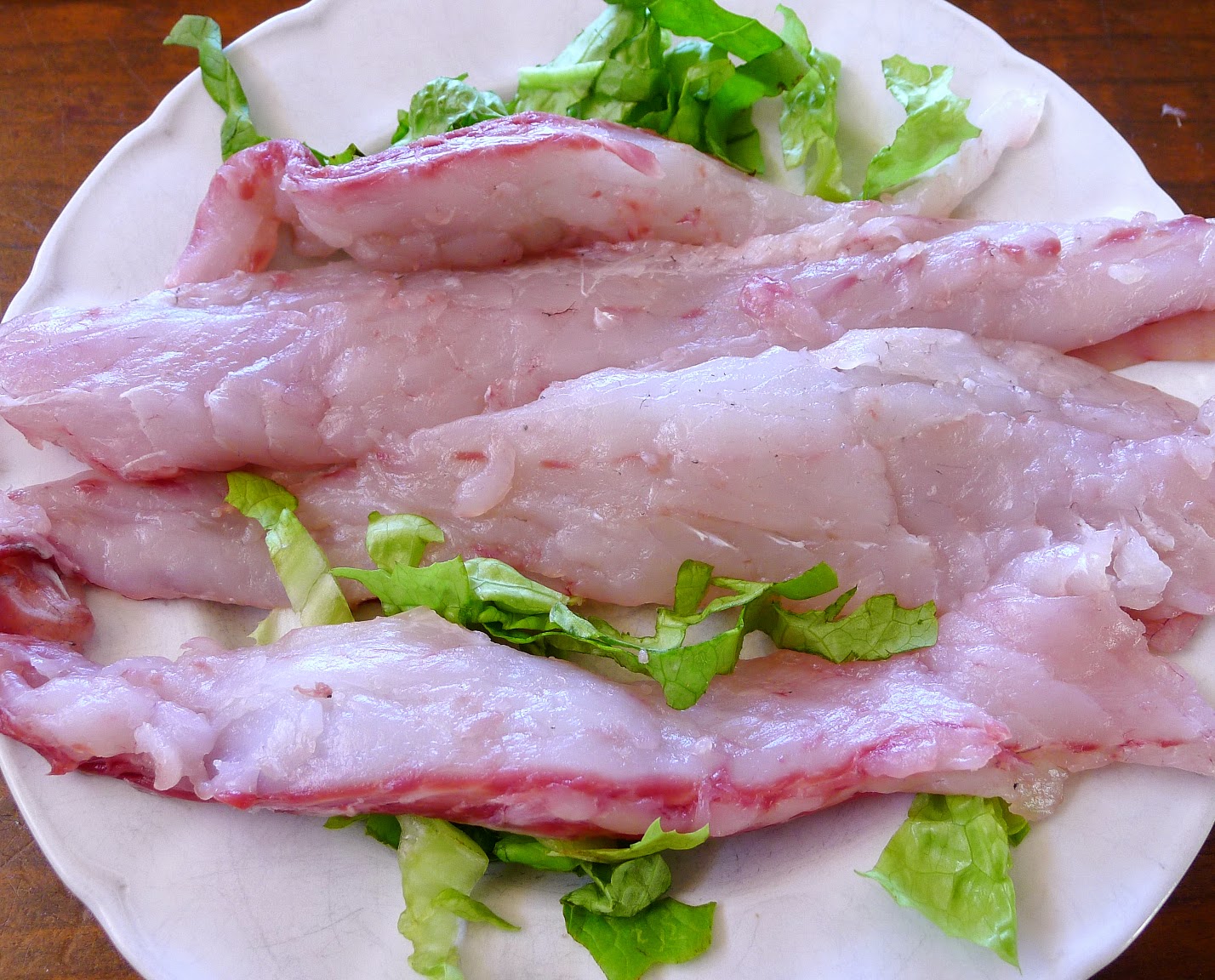 To remove the skin: Make an incision at the tail end. Grasp the skin firmly with one hand and with the knife angled against the skin, pull the skin to release the flesh.

Other fish that can be used in place of corvina are sea bass, wrasse, or, a Mallorcan favorite, llampuga, which is dolphin fish, better known as mahi mahi (and not related to the marine mammal called dolphin). This casserole can be made without the fish for a vegetarian meal.

Typically in Mallorca, one of the Balearic Islands, this casserole would be prepared in the morning and served at room temperature as a light supper dish.

Serves 4 as a main course.

Cut the fish into 3-inch pieces. Sprinkle with salt and pepper and allow to stand for 30 minutes.

Slice the eggplant crosswise ¼ inch thick. Put the slices in a colander and sprinkle with salt. Allow to drain for 30 minutes.

Heat 1 tablespoon of the oil in a small skillet. Add the onion and garlic and sauté 5 minutes without letting them brown. Add the tomatoes, ½ teaspoon salt, cinnamon, bay leaf and freshly ground black pepper. Simmer 15 minutes until sauce is thickened. Pass through a sieve or puree in a blender.

Peel the potatoes and slice them ¼ inch thick. Heat ¼ cup of oil in a large skillet. Fry the potatoes slowly, turning occasionally, until they are fork-tender, about 15 minutes. They do not need to brown. Remove them, reserving the oil.

Fry the green pepper in the oil until softened. Remove.

Place flour in a dish and dredge  the pieces of fish in it, patting off excess. Add enough additional oil to the skillet so the bottom of the pan is covered. Fry the fish until lightly golden on both sides, 4 to 5 minutes. Remove.

Pat the eggplant dry with paper towels. Dredge the slices lightly with flour and pat off excess. Add remaining oil to the skillet. Fry the eggplant in batches until it is tender. Remove.

Lightly oil a cazuela, gratin dish or oven-proof casserole. Spread half the  potatoes on the bottom of the cazuela. Sprinkle with salt. Scatter half of the chopped pepper on top of the potatoes. Layer half of the eggplant.

Place the pieces of fish on top of the eggplant. Add another layer of potatoes and sprinkle them with salt. Continue with remaining peppers and eggplant. Pour over the liquid. Spread the tomato sauce over the top. Cover with foil.

Bake until the casserole is bubbling, about 40 minutes. Allow to rest at least 15 minutes before serving. Serve hot or room temperature. 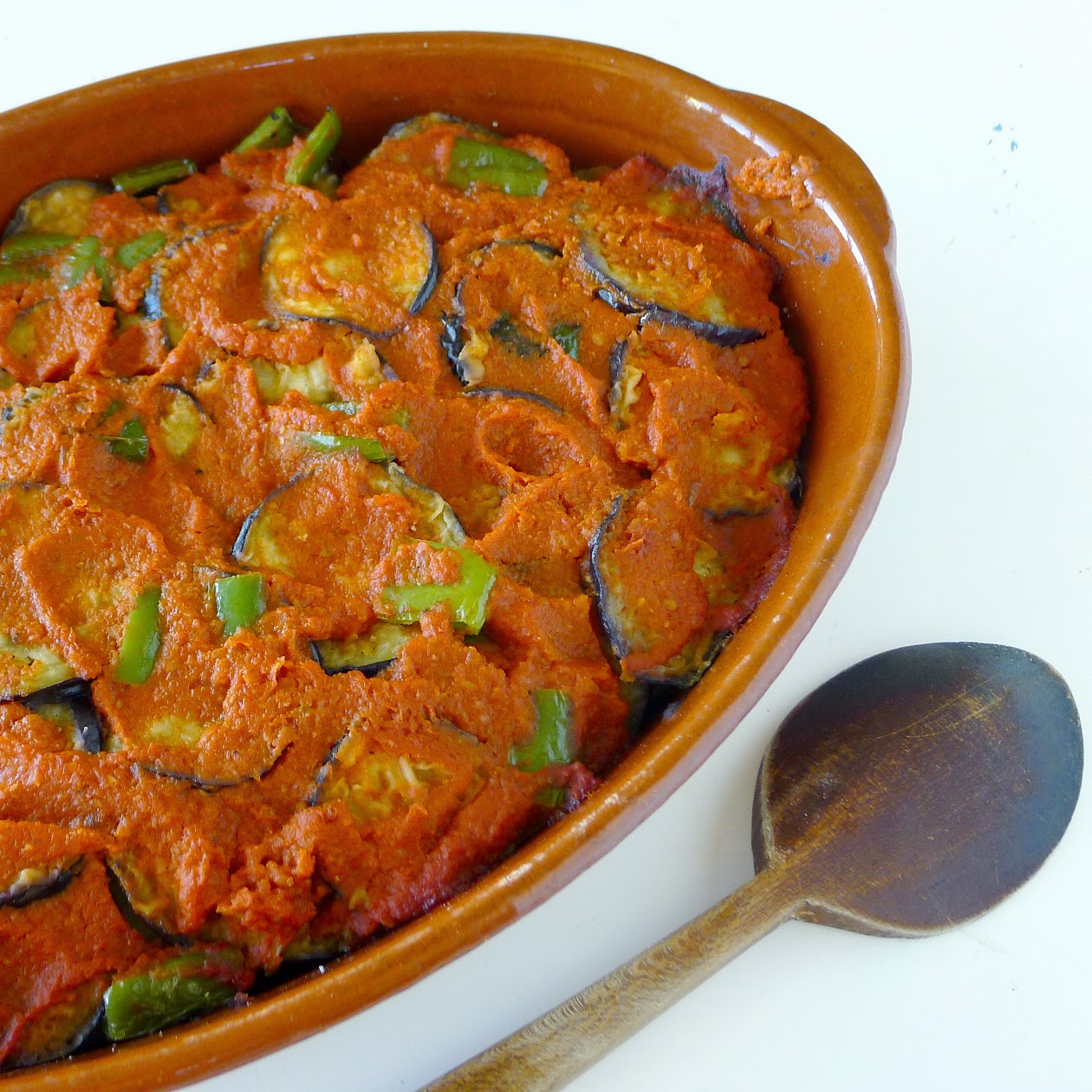