A cada cerdo llega su San Martín, For every pig, its day of reckoning arrives. This old saying refers to the holiday of San Martín (November 11) that marks the beginning of the matanza—hog slaughtering—season in the central regions of Castilla-León. Here in southern Spain, the pig slaughtering time comes later, in January, when conditions are cold enough.

Hog butchering in traditional rural families was a time for celebration, because it meant food in the larder for the coming year. Cured hams, several kinds of sausages, lard, salted pork fat, ribs, trotters, ears, tail, were produced from the butchering and carefully stored to feed a family during many months.

Undoubtedly, the choicest cut of the pig is the loin, which is boned and preserved in adobe, a marinade that keeps the pork conserved for several days  in cold weather. It can be sliced and fried, as required. Or, after marinating, the loin can be cooked in lard or olive oil and kept, totally covered in the fat, as a confit.

My version of the marinated loin isn’t meant to be a conserve. The meat acquires flavor and juiciness from the marinade, then it's roasted. It can be served hot or as a cold-cut for sandwiches.

Place the pork loin in a non-reactive container (glass or earthenware). In a small bowl combine the crushed garlic, pimentón, oregano, thyme, rosemary, peppercorns, salt, 1 tablespoon of the oil and vinegar. Pour this over the loin, rubbing it to cover all the surfaces.

Cover the container and marinate the pork, refrigerated, for two days. Turn the pork in the marinade twice a day. Drain the meat and pat it dry. Allow to come to room temperature. 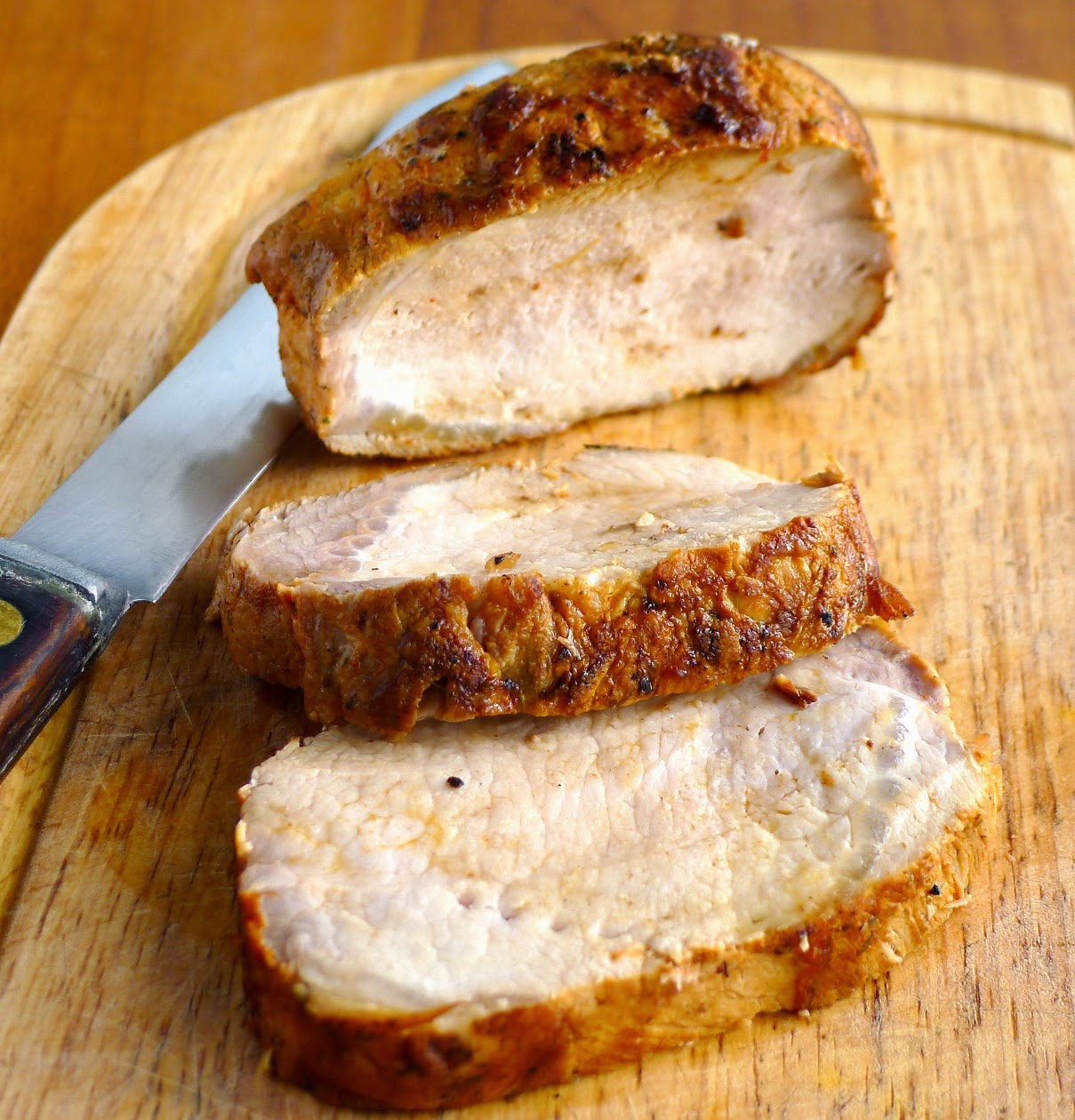 Heat the remaining 1 tablespoon olive oil in a heavy oven-proof skillet or roasting pan. Brown the pork loin on all sides. Place the pan in the oven and roast until pork is done. Meat should be juicy, only slightly pink in the center. If using an instant-read thermometer, it should register 145ºF. Depending on thickness of the meat, this will take from 40 to 60 minutes.

Allow the meat to rest for 10 minutes before slicing.

In La Mancha, the loin is slow-cooked in olive oil, then packed in an orza, a deep earthenware jar, completely immersed in oil which protects the meat from the air. But, in Andalusia, it’s cooked in lard that’s colored and flavored with pimentón, sweet paprika.

The red lard is used as a spread and as a cooking fat. Absolutely delicious spread on slabs of grilled bread. A pair of eggs fried in lard with a slice of the loin alongside makes a hearty supper.

Yes, lard is a fat—and not nearly so healthful as olive oil. But, surprisingly, it has 20 percent less saturated fat by weight than butter! Processed lard sold as shortening is usually hydrogenated—bad. Get leaf lard from a butcher, chop it finely, heat it until melted and strain it. The crispy bits left after rendering are chicharrones, cracklings.

Place the slices of pork loin in a shallow bowl. Combine the crushed garlic, 1 teaspoon of pimentón, oregano, thyme, salt and vinegar. Spread half this marinade over the pork. Turn the slices and spread the remaining marinade on the pork.

Cover tightly and refrigerate at least 8 hours and up to 48 hours.


Melt the lard in a heavy skillet. Carefully add half of the pork slices and their marinade to the lard. Fry, turning once, until pork is cooked through, about 5 minutes. Remove the pork. Fry the remaining pork in the same manner. Scrape any remaining marinade into the lard.

Place the pork slices in an earthenware cazuela or bowl. Remove the lard from the heat. Add the remaining 1 tablespoon of sweet pimentón and smoked pimentón to the hot lard.

Carefully pour the melted lard over the pork slices. Allow to cool completely, then cover and refrigerate. The lard solidifies as it cools. The meat and lard keep up to 2 weeks.
Posted by JANET MENDEL at 11:32 PM