OUT TO LUNCH IN MÁLAGA

We were five at table for lunch, all us semi-professional eaters—cooks, food writers, restaurant critics and guides. (See, I totally avoided saying “foodies.”) Málaga food mavens.

Our leader was Shawn Hennessey, she of Sevilla Tapas (I wrote about Shawn and Sevilla tapas here ), who was spending a week in Málaga. Shawn brought us together and chose a venue. (I had balked at going all the way to Málaga to eat sushi, so it had to be Spanish or, anyway, “Spanish.”) 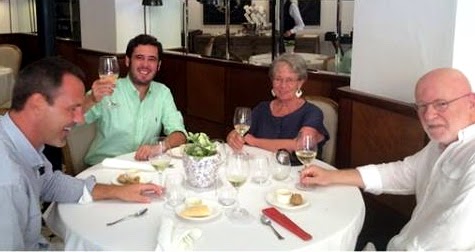 So, here we were at El Tres, which bills itself as “alta cocina clásica,” a mash-up of Spanish, Basque and French, right in the center of Málaga—not a tapas bar, but a proper restaurant (wonderfully comfortable chairs and welcome air conditioning on a blazing-hot day), part of Grupo Gorki which has several restaurants and bars in Málaga.

Presented with the carta, the menu, we dithered. For €47 per head (including wine), we could have a nine-course tasting menu. Or, we could exercise choice, with a la carte starters ranging from €12 to €23 and mains from €18 to €28. Many of the a la carte choices offered the option of media-ración, a half-serving.

A tasting menu is a good way to get to know a restaurant’s specialties. But, then you are locked in to what the chef wants you to eat. Shawn, who has plenty of dining-out experience, solved the dilemma—we ordered half-portions of eight different dishes on the a la carte menu—three starters, five mains—and split each of them between five of us (Shawn is an expert at divving up portions), providing a generous bite of each.

Here’s what was for lunch.


Two taste-teasers—a classic porra antequerana, sort of thick gazpacho cream with garnishes of chopped egg and ham, and a leek terrine with a smear of monkfish liver pâté and parmesan cream.

Porra is very similar to salmorejo, a Córdoba dish. Someone asked me, "what's the difference?" I don't rightly know. (My recipe for salmorejo is  here.)


Starter. Silky and rich, smoked eel terrine layered with sweet williams pears. Gorgeous. Best-liked dish by all of us, even Andrew who claimed he wouldn’t eat eel! Of course, we were famished and our palates were fresh.


Starter. Menestra de verduras con velouté of jamón ibérico, a vegetable melange, each one cooked to crisp perfection, with the unctuous ibérico ham as garnish.

Starter. Arroz meloso de conejo y pulpo de roca al sarmiento (rice with rabbit and octopus, smoked over vine shoots). This was my favorite dish of all. Meloso rice has a juicy, creamy texture, somewhat like risotto. The smokiness brought together the mar y montaña—sea and mountain—of pairing octopus with rabbit.

Entrée. Rape envuelto en guanciale con crema de cangrejos y alcachofas (monkfish wrapped in cured pork cheek with crab cream and artichokes). The sauce was based on a traditional Málaga dish, with ground almonds as a thickener. Monkfish is a “toothsome” fish, as chewy as meat. The cured pork made it unusual. 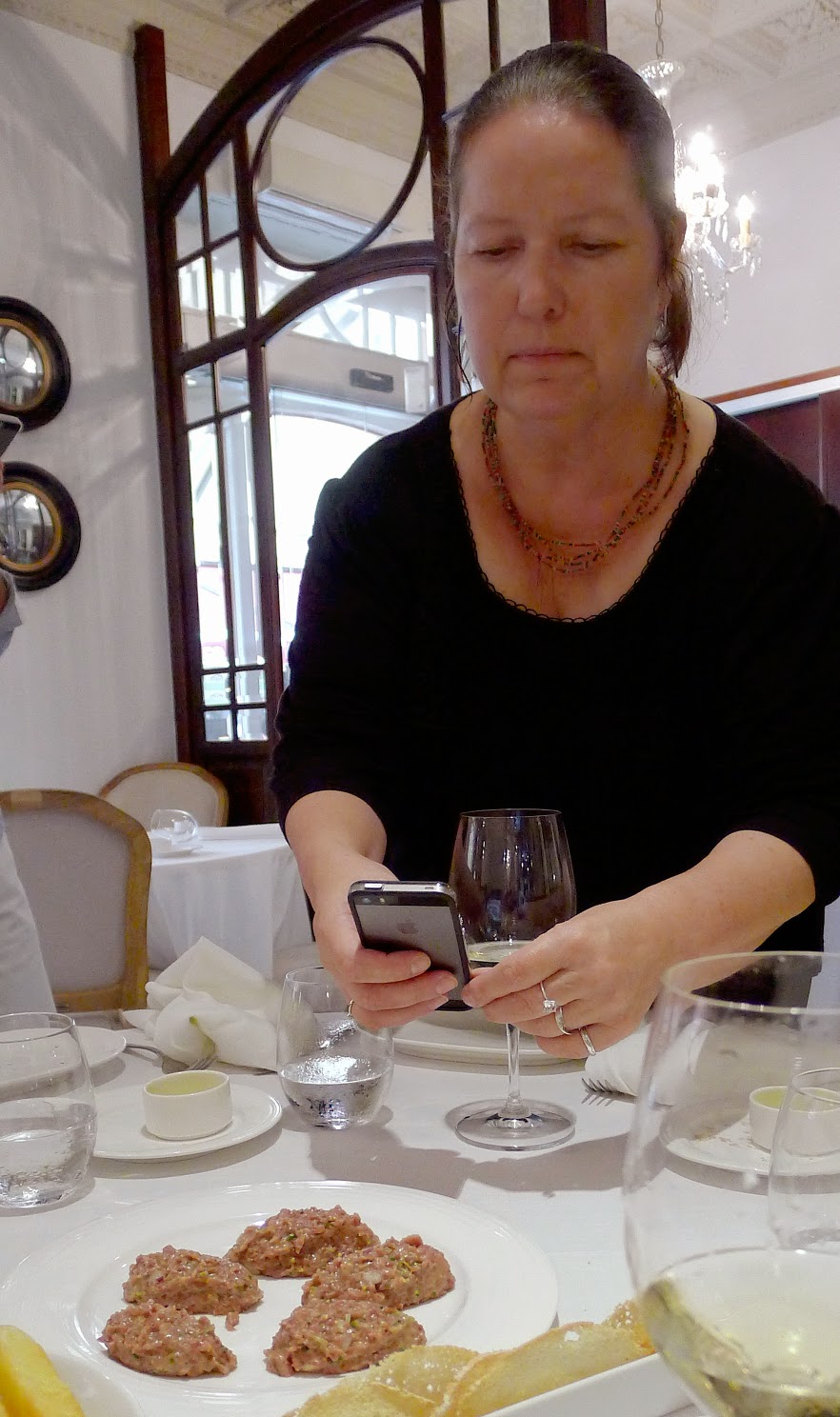 The chef at El Tres is a young malagueña, Rosa Serrano, who has been in the kitchen since the restaurant opened in April.

Our made-to-order tasting menu worked fine. Enough food and a wonderful variety of tastes. Personally, one bite of steak tartare was enough. I’d rather have my beef with nothing. And, I could happily have eaten much more of the hake in green sauce and the squab with carrot purée. Good reason to return to El Tres. 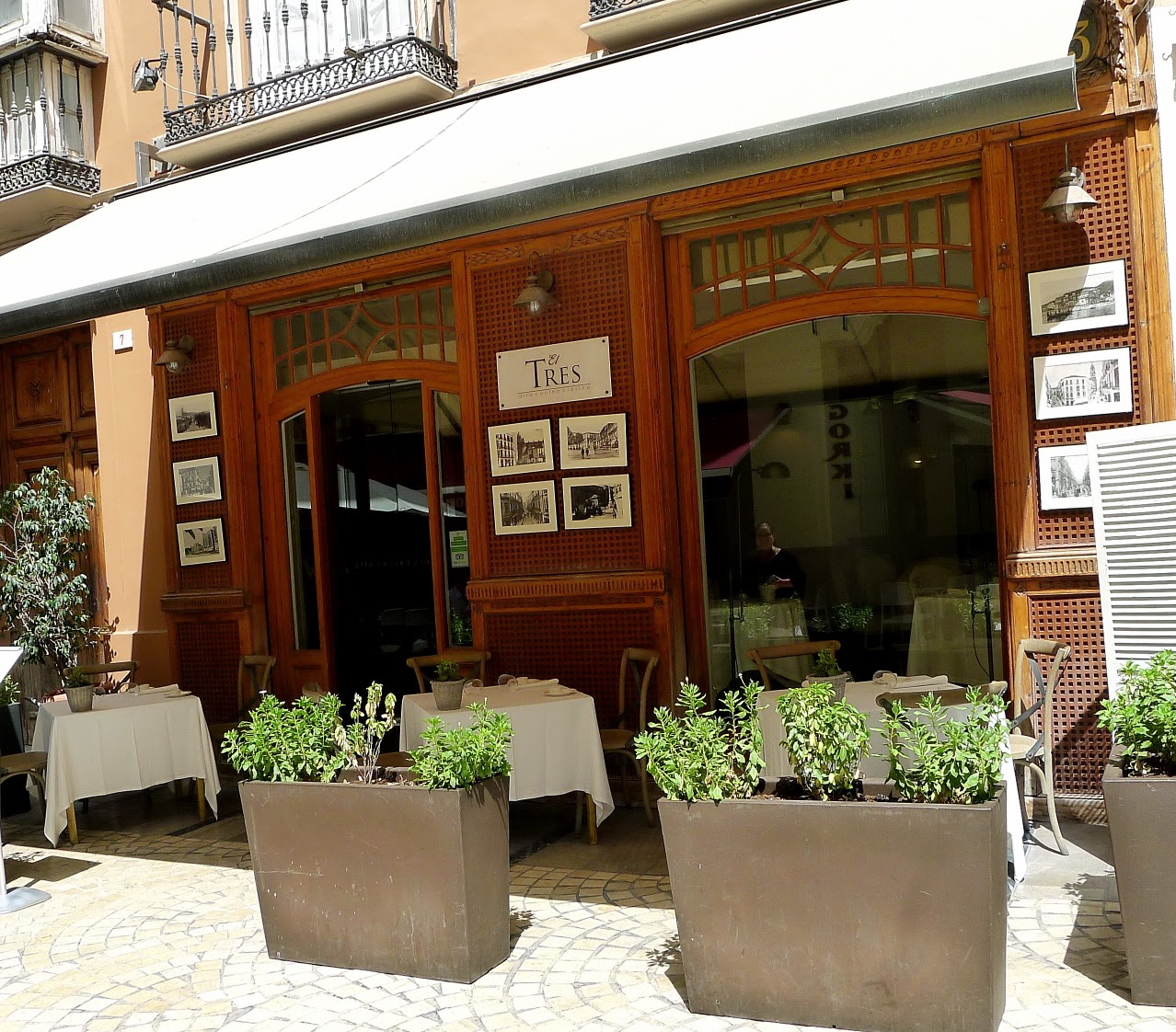