A SWEET DESSERT FOR DADS' DAY


In Spain, Father’s Day comes in mid-March, on the festival of San José, St. Joseph. Which may or may not strike you as odd, that the husband of the Virgin Mary, who, according to the story, was not the father of the child, should be honored as the representative of all fathers.

Be that as it may, the holiday is the perfect excuse to make this pudding, known as crema catalana (Catalan cream) or crema de San José. It is a lemon-cinnamon flavored custard with a crackly, burnt-sugar topping. Egg and milk puddings such as this are especially favored in Spain during Lent. A lovely bit of sweetness during a season of abstinence.


Some years ago I was delighted to find at a local hardware store the traditional tool for caramelizing the tops of these custards. It is simply an iron disk mounted on a rod, a little like a branding iron. The disk is heated over coals or a flame, then held over the sugar to melt it. This was the original salamander, although now the word refers to a small broiler used in restaurants to brown foods. (See below for where to find an old-fashioned salamander.)

I used to make these custards on the cooking courses I gave. They were always a great success with students.

But, oh no! Today, my first batch of puddings—finished with camera in hand—did not have that wonderful, crackly, caramelized tops. Instead, the sugar turned to liquid caramel and had a bitter taste. I’ve lost my touch.


I think I got the disk too hot. I tried again, heating it only two minutes, and holding it very lightly on the sugar about 20 seconds (less smoke). These had the desired crackly tops, but were lighter in color.

I also tried caramelizing the sugar topping under the broiler of the (gas) stove. This doesn’t work so well, as it’s impossible to get the ramekins close enough to the flame. It took 15 minutes to get some color on the top. Best alternative is a small, kitchen blowtorch with a gas cylinder, making it easy to control the caramelization process.

Another tip, if you are using the iron salamander, after caramelizing each pudding, immediately wipe the iron on a wet rag before reheating it. It’s best to do the sugar topping shortly before serving the custards, as with setting, the crackly tops soften.

In a bowl beat the egg yolks with ¾ cup of sugar until pale.

Stir the remaining ½ cup milk and cornstarch together in a small bowl until smooth. Stir it into the custard mixture. Pour the mixture through a strainer into a clean pan.

Cook the custard on a low heat, stirring constantly, until it just begins to bubble. Cook, stirring, for 3 minutes. Remove from the heat and divide between 6 (5 ½ -inch) ramekins or shallow pudding dishes. Allow to cool, then refrigerate the custards.

Shortly before serving, sprinkle the tops of the custards with the remaining sugar (about 1 ½  teaspoons each). Caramelize the tops with a heated iron or kitchen blowtorch. 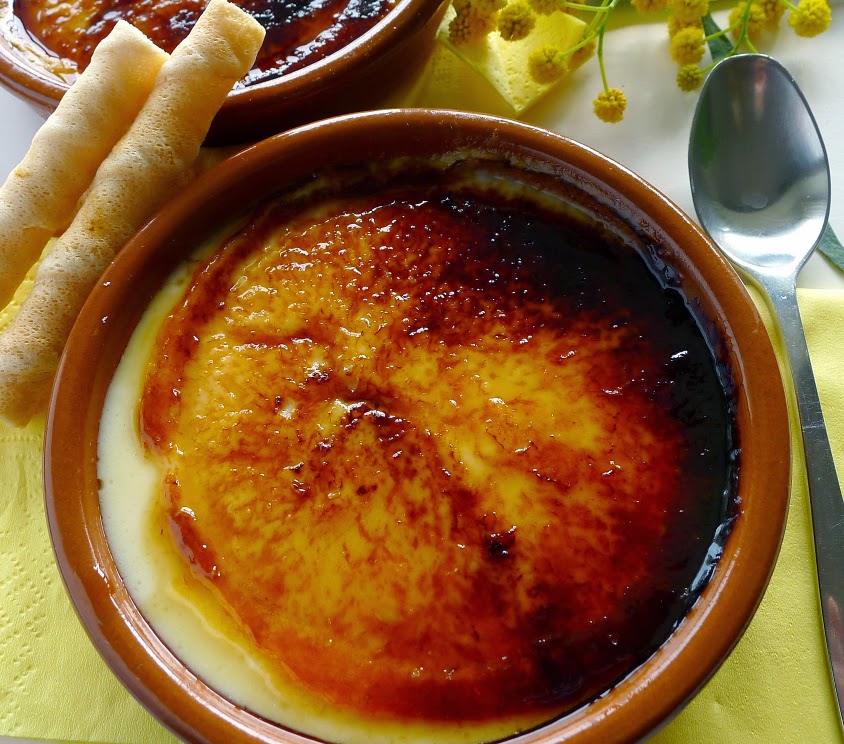 You can order the branding iron and a set of six earthenware ramekins from La Tienda on-line store  http://www.tienda.com/table/products/ca-23.html?site=1