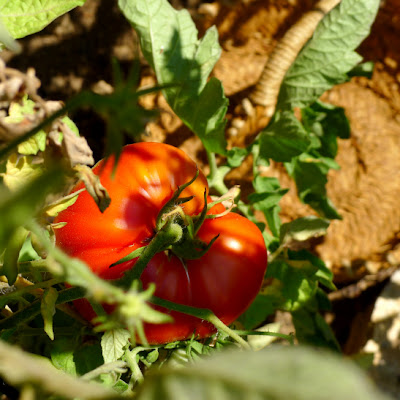 Gazpacho where it grows.

I learned to make gazpacho far from an electric blender. The first summer I lived in Spain, old man Vega showed me how to make real country gazpacho. Vega was the godfather of Paco and Estéban, the brothers who ran the village bar where I learned Spanish cooking. Vega had no family, but he did have a sizable plot of land in the campo (country).

“Many tomatoes in the fields now,” he announced one day. “Why don’t you come to the campo with me and make gazpacho?”

We arranged a day and got together a party. Our friend Irma, from Kentucky, contributed fried chicken and deviled eggs. Vega’s donkey was enlisted to carry Irma and supplies. A case of beer, wine and soft drinks had been carried down to the finca, a small farm, in the early morning and were already cooling in the alberca, a spring-fed reservoir.

We were quite a caravan on the dusty camino real, an ancient country thoroughfare traveled by people, donkeys and goats. It was a steep downhill trek.

At the finca we cooled off in the chilly alberca and enjoyed a beer in the deep shade of a huge carob tree.

Vega took a basket and went to pick tomatoes, peppers and cucumbers. Then he dipped them in the reservoir to rinse off the sun’s heat. He set the basket at my feet, brought a giant earthenware bowl from the house with some onions and garlic.


With a knife Vega proceeded to chunk a lot of bread into the bowl and moistened it with a little water. He crushed the garlic on a stone and added it to the bread. He cut up tomatoes into the bowl, mashing them as he went. Next came olive oil poured from a jug which was stored in a shed. We all helped dice up the cucumbers, peppers and some onion into the bowl.


(The above photos, by David Searl, were copied from an article I wrote in August, 1968, in Lookout magazine.)

At long last, I have tomatoes, peppers and cukes from my own garden, so I am recreating that rustic, peasant gazpacho. These tomatoes—I think they are the esteemed variety, huevo de toro, similar to those called “beef heart,” only named for a different part of the bull’s anatomy—have tough skins that can be peeled off easily.

I crushed 3 cloves of garlic in a wooden bowl using a wooden pestle. I soaked stale country bread (6-8 ounces) in water until softened, then squeezed it out and mashed it up with the garlic. I stirred in about ½ cup extra virgin olive oil, creating a thick paste.

I chopped the peeled tomatoes (about 2 pounds) and mashed them into the garlic-bread-olive oil paste in the bowl. If you don’t have tomatoes that are easily peeled, you could grate the tomatoes into the bowl, discarding the skins.


I added about 1 teaspoon of salt and 3 tablespoons of fresh lemon juice, ¼ cup each of finely diced cucumber, green pepper and onions and 1 cup very cold water. 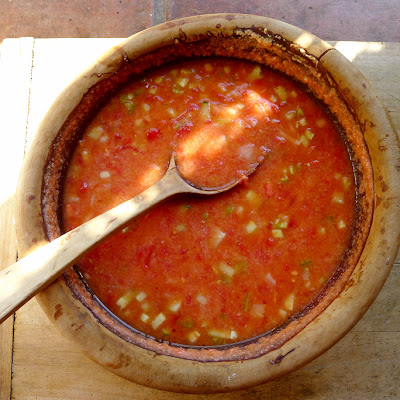 Thick, chunky country gazpacho, ready to serve. No fridge or blender required. The perfect meal on a hot August day in Andalusia.