Are you bored with plain old strawberries and cream? Here’s a luscious alternative to whipped cream—natillas. Natillas (yes, it is singular) is a creamy custard that can be poured over fresh berries. 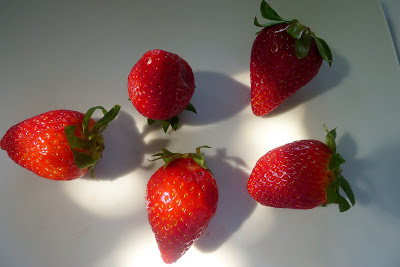 Most of Spain’s strawberries are grown in the province of Huelva the southwest corner of Spain, bordering Portugal. Huelva is Europe’s largest producer of strawberries (about 275,000 tons), with about 85 percent of the crop being exported. Strawberries from Huelva—known as fresa or fresón, meaning "great big strawberry"—are gorgeous red berries, fragrant and sweet.

Natillas is a simple homemade pudding, typical in rural areas where fresh milk and eggs are plentiful. In La Mancha it is made with warmed sheep’s milk (Manchego cheese is a sheep’s milk cheese) that is thickened with egg. The custard is poured over tortas, sponge cookies, somewhat like ladyfingers, then sprinkled with sugar and cinnamon. In Andalusia natillas is made with goat’s milk and served with crispy galletas, plain cookies. Commercial natillas, a favorite store-bought dessert for kids, may not contain eggs at all, but is thickened with cornstarch.

Natillas traditionally is flavored with lemon and cinnamon. However, the milk can be infused with alternative flavors—vanilla bean; orange zest and rosemary; mint. Vanilla custard is particularly good finished with a dribble of chocolate sauce instead of the sprinkled cinnamon.


What to do with all those egg whites? Make meringue toppings to serve with the natillas.

Cook the custard in a double-boiler over boiling water, as direct heat is likely to scramble the egg yolks before they thicken. If the custard is to be served with fresh berries, let it cool before spooning over strawberries. With berries, the ladyfingers and sprinkling of cinnamon can be omitted.

Combine 2 cups milk, cinnamon stick, zest and sugar in a saucepan and bring to a boil. Remove from heat and strain into a heatproof bowl.

Stir the remaining 1 cup milk with the cornstarch until smooth. Beat in 4 egg yolks. Whisk in the hot milk. Place the mixture in the top of a double boiler and cook over boiling water, stirring, until it is as thick as cream, 10 to 12 minutes.

If using, place 2 sponge cookies, ladyfingers or plain cookies in each of 6 shallow pudding bowls. Spoon the custard over the tortas. Sprinkle with cinnamon. Chill the puddings.

Or, if serving with fresh strawberries, allow the custard to cool, then spoon it over sliced berries.

Preheat oven to 300ºF. Line a baking sheet with parchment.

Heap 12 mounds of the meringue on the baking sheet. Bake until peaks are golden, 12 minutes. Turn off oven and allow the meringues to dry for 30 minutes.

Place one meringue on top of each pudding. Remaining meringues can be served with fresh berries. (They are too sticky to be eaten out of hand.) 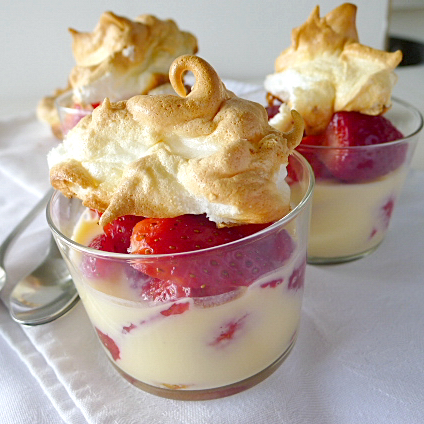