ON A PEPPER ROLL

Peppers are coming fast and furious. Last week I was frying the thin green ones (read about frying peppers here). This week I’m stuffing big fat red bell peppers that are rampant in the garden.

I used to love my Missouri grandmother’s stuffed peppers. She used ground beef and rice and braised the peppers very slowly in the oven. But in southern Spain, I’m still not ready to turn on the oven. So I prepare the peppers Spanish style, cooked on top of the stove.

But I make some adjustments here too. Spanish cooks almost always roast the peppers first, peel them, then stuff them. But without their skins, the peppers don’t sit up smart in the pan. So I skip that step.

End-of-season tomatoes are perfect for making a chunky sauce to cook with the peppers, but canned tomatoes can be substituted. I like ground pork for the stuffing, but you could use ground beef or chicken thighs instead.

Another sort of stuffed pepper is the piquillo. You will find more about piquillo peppers and a recipe here. 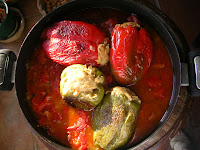 Soak the bread until softened in milk or water. Squeeze out the liquid and discard. Crumble the bread into a mixing bowl.

Remove 1 tablespoon of beaten egg and reserve it in a saucer. Add the remaining egg to the bread. Add the minced onion and minced garlic. Stir in 1 teaspoon of salt, nutmeg, cloves, pepper, and parsley. Add the ground meat and chopped ham. Combine the mixture well. Stuff the peppers with the meat mixture.

Dip the open ends of the peppers in the reserved beaten egg, then into the flour.

Heat the oil in a deep skillet. Fry the peppers, floured-side down. Add the chopped onion and garlic and turn the peppers to let them fry slowly on all sides, about 8 minutes. Add the tomatoes, cumin, 1 teaspoon salt, and pepper. Bring to a boil, cover the skillet, and simmer 45 minutes, turning the peppers occasionally. Remove the lid and cook another 20 minutes, until pepper skins are shriveled and tomato sauce is reduced.

Cut the peppers in half lengthwise and arrange on a serving platter. Spoon the sauce over them.