Sevilla is the tapas capital of the world. This is where the tapas custom originated. Although I live only a couple hours away from that magical city, I don’t get there very often.

But I vicariously enjoy virtual tapas from Sevilla every day by following posts on Facebook from Sevilla Tapas. Shawn Hennessey, a Canadian who lives in Sevilla, posts  "live" photos of tapas from bars that she is visiting in the moment, sometimes as many as six in a day! Shawn, known as "la chica con el blog de tapas,”  also does tapa tours and blogs about other happenings in Sevilla. (You can see her vertiginous cathedral rooftop slide show at http://azahar-sevilla.com/blog/2011/05/18/cathedral-rooftop-visit/ )

It was thanks to Shawn that I acquired a copy of a book about tapas, with essays and recipes, from the owner of one of Sevilla’s long-established tapa bars, the eponymous Enrique Becerra. The book (in Spanish) is EL GRAN LIBRO DE LA TAPA Y EL TAPEO by Enrique Becerra (Almuzara, 2009).

The book answers the question, “what is the tapa?” Answer: a small portion of something to eat that accompanies a glass of wine. And, yes, size matters. Not too big (you would need more wine), not too small (wine left over). Enrique Becerra relates how tapas originated (on Calle Sierpes); the meaning of the verb tapear—only conjugated in the plural, as in, “we’re going for tapas”—and the philosophical discussion of whether the tapas occasion can take place in a single bar or must move to several, and whether it can be enjoyed only standing up or whether it’s ok to sit at a table. The reply: it all depends.

A few other observations from the book: tapas—to be tapas—are served one at a time and in individual plates. In other words, tapas are not meant for sharing.  Although raciones might be .

The recipes in the book are for very traditional Sevilla dishes—such as patatas con cazón en amarillo, potatoes and fish in yellow sauce; sangre encebollada, chicken blood stewed with onions and wine; remojón granadino, potato salad with salt cod and oranges—or reinterpretations of classics, such as shellfish sausage with fake baby eels in garlic or three-fish brochette with avocado sauce.

Book in hand, I’m off to the kitchen to prepare some Sevilla tapas in real time.  I chose a very traditional vegetable dish, alboronía, made with zucchini, eggplant and pumpkin with the unusual addition of apple, and a dead-simple, exceptionally tasty way to cook shrimp.

Adapted from the recipe in LA TAPA Y EL TAPEO by Enrique Becerro. According to Enrique, the dish’s name derives from “Al Burán,” daughter of King Almutamid of Sevilla, the poet king, who, to celebrate his daughter’s wedding, commanded the best cooks in all of Islam. One of them created this delicacy for the occasion.

Heat the oil in a heavy pan or earthenware cazuela. Sauté the onions and garlic until softened, 5 minutes.

Add the eggplant and cook 3 minutes. Add the zucchini, pumpkin and apple. Season with salt and pepper. Cook on a low heat, stirring occasionally, until the vegetables are tender, about 15 minutes. The vegetables should release enough liquid, but, if they appear to be sticking, add a little hot water.

Divide the vegetable mixture between four to six cazuelitas (small earthenware ramekins). Cover the tops of each with beaten egg and sprinkle over the pine nuts. Sprinkle with pimentón.

Bake until egg is set and pine nuts are golden, about 25 minutes. Serve hot or room temperature. 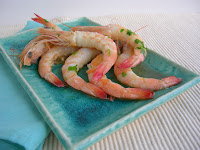 This recipe is adapted from LA TAPA Y EL TAPEO by Enrique Becerra.

“Be sure to spoon up all the pan juices created by the wine and shrimp heads,” Enrique advises. This is best made with large shrimp with heads intact. That’s because the heads contain the roe that adds incredible flavor.

Peel the bodies of the shrimp, keeping heads and tails intact. Remove the dark vein.

Spread the oil in a shallow oven pan big enough to hold the shrimp in a single layer. Lay the shrimp in the pan. Pour over the manzanilla. Sprinkle with salt, pepper and parsley.