SPAIN, FROM THE HEART 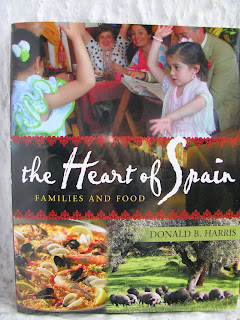 
If you live in the US and have an interest in the food of Spain, you likely have heard of La Tienda, an on-line retail store that specializes in foods imported from Spain. Not so many years ago, before pimentón, chorizo, olive oil from Spain, serrano and ibérico ham became popular in many American supermarkets, La Tienda http://www.tienda.com/  was one of a very few places to find authentic Spanish products.

La Tienda is featuring recipes from one of my cookbooks, TAPAS—A BITE OF SPAIN on its web site. TAPAS, with scrumptious photos by Michelle Chaplow, was published by Santana Books in Spain. La Tienda has a near-exclusive stock of this book in America. The current recipe is “Piquillo Peppers Stuffed With Prawns.” Piquillo peppers imported from Spain are available from La Tienda. Have a look at the recipe here http://www.tienda.com/recipes/emails/021511.html . Should you wish to order the book from La Tienda, just click on the picture of it at the end of the recipe.  (And, my blog about piquillo peppers here  http://mykitcheninspain.blogspot.com/2009/11/pick-peck-of-piquillo-peppers.html .)

La Tienda is a family business that was founded in 1996 by Don Harris and his wife, Ruth. The couple lived in Spain with their children during the 1970s, in El Puerto de Santa María (Cádiz), when Don was stationed at the nearby naval base of Rota.

Explained Don, La Tienda was a way to share a taste of Spain as well as the country’s  grace, warmth and traditions that have brought so much to the lives of their family.

“Family is our focus,” Don writes on the web site. “Just as the family is central to life in Spain, we hope to share that emphasis with everyone we work with: our customers, our employees, and our vendors. And, of course, nothing brings a family together like a wonderful meal!” Two of their three sons also work in the business. All make frequent trips to Spain, renewing friendships and searching out products. 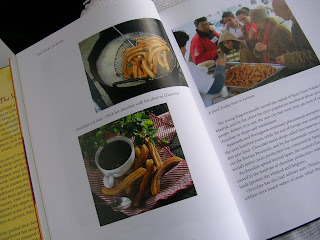 Now Don has written a book, THE HEART OF SPAIN—FAMILIES AND FOOD (Duende Press; Williamsburg, VA.), telling about the producers and purveyors and their families in Spain as well as some of the background about certain products. He takes you to visit a cheese maker in La Mancha, Sherry families in Jerez, bean producers in La Granja, ham on the hoof, saffron in the field, shopkeepers, cooks and sauce makers. The book is a little bit of a travel guide, but always illustrated with personal encounters. If there were a “cloud” of most-used words, it would emphasize the words “family,” “traditional,” “values,” “warmly,” “dignity,” “friendship,” “continuity,” “spirituality”


In his book, Don Harris relates the story of King Philip II, an early (16th century) aficionado of chocolate. The king, a pious Catholic, faced a dilemma: if chocolate was considered a food, then he would be deprived of it during Lent. But, if the Church classified chocolate as a beverage, he was within bounds, for beverages were not included in the rules of fasting. His confessor assured the scrupulous Philip that drinking chocolate was exempt from fasting requirements. Chocolate continues to be a sweet and comforting delight during the otherwise austere Lenten fast leading up to Easter.

The squares of chocolate already contain sugar and thickening. All you do is add squares of the Valor bar to milk, simmer it on the stove and stir occasionally until it reaches desired thickness. The thickness can be adjusted by the number of chocolate squares used and how long it is heated. On average, 2-3 squares per cup of milk and around 2 minutes simmering time  produces a delicious mug of hot chocolate!

The following recipe is for making Spanish-style drinking chocolate if you don’t have tablets of Valor chocolate a la taza handy. It is adapted from MY KITCHEN IN SPAIN, the cookbook. There is no recipe there for churros, the fried strips of batter to accompany the chocolate, as I find them difficult to make in the home kitchen, but there is a recipe for buñuelos, also served to accompany chocolate. (That recipe is here.) 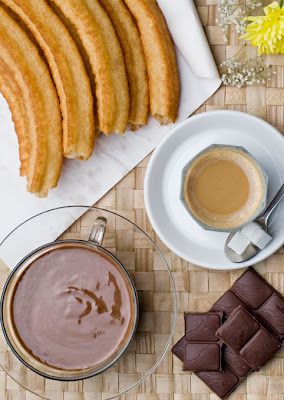 (Photo of chocolate and churros by Jerónimo Alba from COOKING IN SPAIN.)
Hot Drinking Chocolate
Chocolate a la Taza

This is more like liquid chocolate pudding than like cocoa. It’s thick enough to coat a spoon. It can be prepared with water, milk or a combination.

8 ounces (8 squares) semi-sweet chocolate
3 cups water
3 tablespoons cornstarch
2 cups milk
1/4 cup sugar, or to taste
1/2 teaspoon vanilla extract
Break the chocolate into pieces and put in a pan with 2 cups of the water. Heat, stirring, until the chocolate is melted and smooth.

Stir the cornstarch with 1 cup water until it is smooth. Return the chocolate to the heat. Beat in the milk, sugar and cornstarch. Cook, stirring constantly until the mixture thickens. Cook 2 minutes longer. Remove from heat and stir in the vanilla. Add additional sugar, if desired.

Pour into mugs and serve. The chocolate can be kept hot in a double boiler over simmering water. It can be reheated in a microwave.
Posted by JANET MENDEL at 7:15 PM