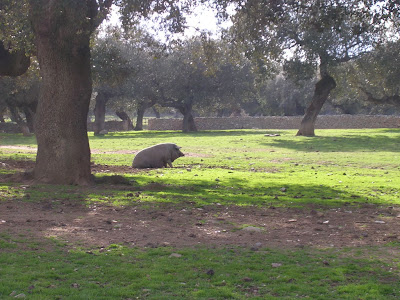 When I was reporting for an article about Spanish ibérico ham from 5J in Jabugo (read the story in the Los Angeles Times here), I was sniffing about for recipes with ham and listening for Americans’ experience with Spanish ham. I called up my main “ham man,” Miguel Ullibarri, formerly director of the Real Ibérico consortium and now with A Taste of Spain, a tour company specializing in food and wine tours. He told me about Bruce Weinstein and Mark Scarbrough, authors of Ham—An Obsession with the Hindquarter (Stewart, Tabori & Chang, March, 2010), who were planning to escort a grand ham tour to Spain. (Sorry to report, the tour is off for spring 2011. Stay tuned for future tour dates.) 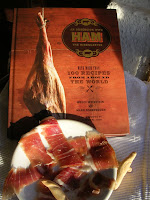 Mark and Bruce, who live in Colebrook, CT., got involved with Spanish hams while researching a chapter in their book about dry-cured hams in Europe. Mark is the writer and Bruce the chef and recipe developer. Through Miguel Ullibarri the authors got in touch with Fermin, the sole exporter of ibérico hams to the U.S.

“That’s who provided the ibérico ham that graces the cover of the book,” said Mark. “For months after the photo shoot for HAM, Bruce and I lived in bellota bliss (bellotas are acorns--what the pigs fatten on). We would get invited to dinner parties and bring the whole leg, shave off a pound or so, and be piggy with abandon. When we got the thing down to the bone, we cooked it with a pot of beans, cracked open a bottle of rosé cava, and moved on to the sequel to ham, the first-ever all-goat (meat, milk, cheese) book in English” (slated for publication April 2011).
SAMPLING THE HAM BOOK

HAM, the book, presents a global look at porky hindquarters, with chapters covering Fresh Ham, Dry-Cured Ham in the Old World, Dry-Cured Ham in the New World and Wet-Cured Ham. Recipes run the gamut from appetizers to soup to main dishes to leftovers. There are some tempting recipes for Chinese stir-fry, Italian-style pizza, down-home southern country stews and chic salads (smoked ham with arugula, pears and honey vinaigrette, for instance), all with tips and Testers’ Notes. Naturally, I gravitated to the recipes with Spanish ham (serrano, as ibérico is too good to use in cooking). The Serrano-Wrapped Scallops, Serrano Fritters and Stewed Mussels with Jamón Serrano, Chickpeas and Saffron all sound enticing. But I decided on trout stuffed with ham, a recipe somewhat like a traditional way with trout in Navarra. 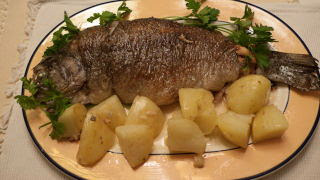 (Photo in my kitchen in Spain is by Donna Ellefson)
Whole Trout Stuffed with Jamón Serrano, Rosemary, and Fennel Seeds
Recipe adapted from HAM An Obsession with The Hindquarter,
by Bruce Weinstein and Mark Scarbrough: Photographs by Marcus Nilsson
(Stewart, Tabori & Chang; 2010).
The recipe in the book calls for 4 (1-pound) trout. Trout at my market are considerably smaller, so I chose to use a larger salmon-trout, which weighed in at about 1 ¾ pounds after boning, serving 3. Although the recipe doesn’t mention removing pin bones for the individual-sized trout, I decided to do this to facilitate dividing the cooked fish into crosswise slices.  I chose to use needle and thread to sew up the fish’s cavity in order to make it easier to turn the fish without losing the stuffing. And, because I like fresh thyme more than rosemary, I substituted my favored herb. The fennel seeds lend a subtle Pernod-y taste, just right with the ham. Deglazing the pan with Sherry vinegar creates an instant and very delicious pan sauce.

While shopping, without thinking about it too much, I picked up a Rueda wine, a white made of verdejo grapes (Pentio, 2009). The fruitiness of verdejo, I thought, would complement the ham in the stuffing. It was only later, reviewing the recipe in HAM, that I noticed that the recipe’s headnotes state, “Fast, easy and elegant, this company supper cries out for a bottle of Spanish white from the Rueda region.” Ah so. Perfect, indeed. 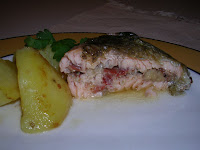 Mix the bread crumbs, ham, garlic, fennel seeds and rosemary or thyme in a medium bowl. Add just enought wine to moisten the mixture, but not enough to make it wet.

Open up the salmon-trout and spread the stuffing mixture on one side, patting it into place. Flap it closed. (You can use needle and thread to sew up the cavity opening.)

Heat the oil in a large ovenproof skillet over medium heat, adding the oil. Slip the trout into the skillet and cook until crisp, about 7 minutes, shaking the skillet occasionally so the trout doesn’t stick.

Use a large spatula to turn the trout, then shove the whole contraption in the oven. Bake until cooked through, about 10 minutes.

Remove the very hot skillet from the oven and use that large spatula (or two) to transfer the trout to a heated serving platter.

Set the skillet back over medium heat and splash in the vinegar. Stir quickly to scrape up any stuff on the bottom of the skillet, then drizzle this sauce over the trout.

Mark Scarbrough blogs, with taste and humor, about his favorite foods at http://www.realfoodhascurves.comBook your tour to ham country with Miguel Ullibarri at http://www.atasteofspain.com/ 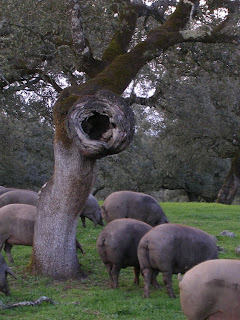 Hams on the hoof.
Posted by JANET MENDEL at 7:32 PM