WHEN LIFE GIVES YOU LEMONS--- 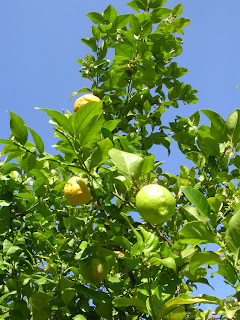 An especially wet winter worked wonders for my lemon tree—it’s loaded with fruit. Right now the tree bears large, overripe lemons as well as small, green ones that will mature by the end of summer, plus fragrant blossoms presaging winter’s fruit. In other words, three crops of lemons in a year.

I use lemon juice and zest just about daily, because they are essential ingredients in Spanish cooking. Tangy lemon juice combined with olive oil, chopped garlic and parsley makes aliño, a dressing or marinade for meat, fish, vegetables. Milk scalded with lemon peel and cinnamon stick is the starting point for Spanish custards such as natillas and flan.

But, recipes using whole lemons are few and far between. Several years ago I made preserved lemons—they are put up in a strong brine—from a recipe in Paula Wolfert’s first-ever cookbook,  Couscous and Other Good Food from Morocco (Paula will soon come out with a completely updated edition of the Morocco book). But, I had more preserved lemons than I could use. 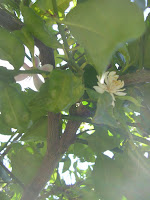 Since then I’ve experimented with using quantities of fresh lemons, sliced or chopped, in a variety of dishes. Chopped lemon is especially good added to lentils as they cook, whether vegetarian or with sausage. I add wedges of lemon to lamb stew with a touch of honey to balance the tartness.

Inspired by a salad I discovered in La Mancha—moje de limones—with peeled and chopped lemons, scallions, black olives and olive oil, I add shrimp and avocado to make a sensational take on shrimp cocktail (the recipe is in my book COOKING FROM THE HEART OF SPAIN—FOOD OF LA MANCHA).

The dish I make over and over when lemons are abundant is lemon-roasted chicken. Chopped lemons, onions and tomatoes in the roasting pan beneath the bird cook up to almost a confit, bringing out the sweetness of the lemons as well as their tang. Couscous or steamed rice to soak up the lemony pan sauce makes a good side dish. 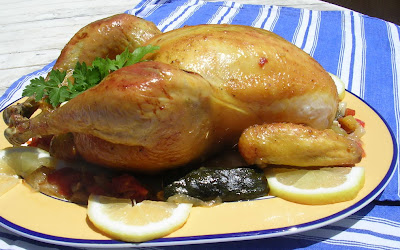 Serves 6. 1 (4 ½-pound) roasting chickensalt and pepper1 large or 2 small lemons1 bay leaf1 tablespoon olive oil1 onion, quartered and sliced1 tomato, chopped2 cloves garlic, sliced1 (2-inch) cinnamon stickpinch of ground cumin½ cup dry white wine
1 zucchini (about 1 pound), cut in half crosswise and lengthwisePreheat oven to 350ºF.Sprinkle chicken inside and out with salt and pepper and allow to come to room temperature. Place 1 slice of lemon inside the chicken with bay leaf. Spread half of the oil in a roasting pan just large enough to hold the chicken.     Chop remaining lemon, discarding seeds, and spread in the bottom of the pan with the sliced onion, tomato, garlic, and cinnamon. Place the chicken  on top of chopped lemon and brush it with remaining oil. Sprinkle with cumin.     Roast the chicken, uncovered, for 45 minutes. Add the zucchini to the pan. Pour over the wine and cover the roasting pan (use a lid or foil). Roast until chicken is tender, about 1 hour longer. Remove the chicken and zucchini to a heated platter and allow to set for 15 minutes. Skim fat from roasting pan. Discard cinnamon stick. If most of liquid has cooked away, add a little water to the pan and scrape up the lemon and onion mixture. Serve it in a bowl alongside the chicken.
Posted by JANET MENDEL at 10:50 PM