PICK A PECK OF PIQUILLO PEPPERS

When I spotted the packet of piquillo pepper garden seeds, I thought it seemed a brilliant idea—plant a whole field of peppers and enjoy them fresh instead of buying them in cans.Piquillo peppers are those flame-red peppers you buy in jars in the gourmet section of the grocery store. Chefs and food magazines rave about them for their complex sweet and piquant flavor. Once an artisanal product from Navarra, where they are grown in the area around Lodosa in the Ebro valley (and where they enjoy PDO—protected denomination of origin—status), in the last 20 years their fame has spread far and wide. Piquillo peppers are roasted over coals, peeled and packed in cans or jars. Beyond trendy, they have become an emblematic and essential ingredient. 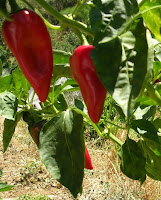 That’s why I thought growing them would be a dream-come-true. I would roast them myself and conserve them in olive oil. I was already planning to serve a starter of tiny piquillos stuffed with shrimp for Christmas dinner. Their gorgeous red color makes them perfect for festive meals. Well, I have to confess, my piquillo dreams were dashed. Oh, I picked my peck of piquillo peppers, all right. They were beautiful specimens, crimson in color, small (3 to 4 inches) triangular peppers with tips like little curved beaks (piquillo means beak). I picked peppers from September till November. The first thing I learned is that the skins of fresh piquillos are like leather. Whether green or red, raw or cooked, the skins are too tough to chew. Which explains why the only way you ever find these peppers is roasted and skinned, in conserve.  So I started roasting them. I tried charcoal, gas flame and broiler. I baked them, I steamed them. But after hundreds of peppers passed through my home processing, I had not a single whole one suitable for stuffing. The flesh was so delicate it ripped into shreds or had to be scraped from the tough skin. Perhaps this was due to lack of some nutrient or insufficient water in my terroir. Instead of meaty little whole peppers, I had a quantity of piquillo pulp. This I packed in small containers and put in the freezer, an ingredient for a sensational sauce. The next thing I discovered when I went to the supermarket to buy canned piquillos for the beauty shot is that they are imported from Peru! I did find the “real” ones, with the seal of PDO Piquillos de Lodosa, at El Corte Ingles, the department store that is Spain’s equivalent to Nieman Marcus. 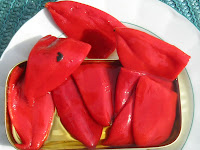 About that sauce. If you have a can or jar of piquillos in the cupboard, you have the makings of a fabulous sauce. Serve it with grilled foods, as a dip or as a dressing for vegetables or shrimp. All you have to do is open the can, put the piquillos in a blender with some extra virgin olive oil, salt and a touch of vinegar (Sherry vinegar preferred). Garlic is fine too, or a pinch of thyme or cumin or chopped chile. If you want a sauce to serve with hot foods, just heat the sauce gently in a small saucepan. You can also confit the peppers—whole or in strips—in olive oil until they are soft and silky and serve them as a side dish. But, best of all is stuffed—with seafood, goat cheese, boned quail. The classic filling is bacalao, salt cod, a version that I’ve sampled in the taverns of San Sebastian (Basque Country). My favorite recipe is piquillos filled with shrimp and topped with cheese. Pimientos de Piquillo Rellenos con GambasPiquillo Peppers Stuffed with ShrimpThe traditional way to prepare the peppers calls for an extra step—before baking with sauce, the peppers are coated in egg and quickly fried, giving them a sort of outer skin that holds peppers and stuffing together. But then you don’t see the luscious red color until you cut into them.Makes 6 tapas or 4 starters.4 tablespoons olive oil, divided2 tablespoons finely chopped onion2 cloves garlic, chopped2 tablespoons flour1 tablespoon dry Sherry1 cup less 1 tablespoon milk½ teaspoon salt6 ounces uncooked, small, peeled shrimp20 piquillo peppers, drained (2 jars)4 tablespoons white wineFlour for dredging peppers1 egg, beatenOlive oil to fry the peppers2 ounces grated cheeseHeat 2 tablespoons of the oil in a saucepan on medium heat. Sauté the onion and 1 clove of the garlic, 2 minutes. Stir in the flour and cook 1 minute. Whisk in the Sherry, milk and salt. Cook, stirring constantly, until sauce is thickened, 5 minutes. Stir in the shrimp and cook 2 minutes. Remove the pan from the heat.Select 12 of the drained peppers. Carefully spread them open and spoon shrimp filling into them. Place them in a single layer on a shallow pan or tray. When all are filled, cover with plastic wrap and refrigerate for at least 1 hour to allow the filling to thicken.While the shrimp mixture is chilling, prepare the sauce. Combine remaining 2 tablespoons oil, 1 clove of garlic, white wine and remaining piquillo peppers in a blender and blend until smooth. Preheat oven to 350ºF.Place flour and beaten egg in two shallow bowls. Heat oil in a skillet on medium heat. Dip the open end of the stuffed peppers into flour, then dredge the peppers in flour. Roll in beaten egg and fry until lightly golden. Remove the peppers from the pan and place them in a baking dish or individual cazuelitas. Spoon the sauce over the peppers and top with grated cheese. Bake the peppers until cheese is melted and sauce is bubbly, 15 minutes. Serve hot or room temperature. 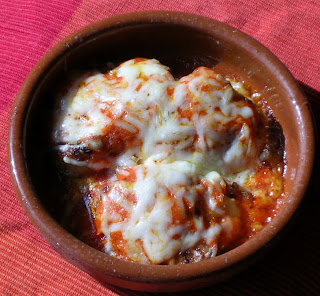