World Paella Day is coming ‘round again (Tuesday, September 20), a grand occasion to get out the paella pans. But instead of the classic Valencia paella, golden with saffron, I am making black paella, using squid ink to color the rice. Also heretical, I’m using chorizo—forbidden to true believers. OK, so my rice dish is not really paella, it’s arroz negro. But, I’m making it in a paella pan with true Valencia paella rice, so I figure it’s acceptable for World Paella Day.

Arroz negro, a specialty of Alicante, is as traditional as paella is in Valencia. Like paella, it starts with a sofrito to which cuttlefish and shrimp are typically added. No, it wouldn’t include chorizo.
I totally “get it,” that paella is about the flavorful rice, not the add-ins. You’re not overcooking the shrimp, you’re flavoring the rice. Nevertheless, I decided to save the delicate fresh shrimp as a topping for the rice instead of cooking with them. I used the shells and fish trimmings to make a flavorful seafood stock.
About Spanish rice. Paella rice is a round, medium-short variety (usually Sénia, Bahía or Bomba). It has a white perla (pearl) where the starch is concentrated. Its great virtue is as a flavor conductor, soaking up the savory juices with which the rice cooks—olive oil sofrito; chicken, rabbit or seafood; saffron. Paella rice (often called “Valencian,” because it is grown there) is similar to Italian rice varieties used for risotto. But the cooking method is totally different. Risotto is stirred to develop the creamy starch. Paella rice, cooked “dry,” is never stirred, as stirring would break up the starch kernel.
My local fish vendor didn’t have cuttlefish, so I bought potón, thick rings of giant squid. Cooked with the sofrito and rice, about 20 minutes, they were very tender. The chorizo added flavor, making a mar y tierra (surf and turf) rice. (Pescatarians can omit the chorizo.) Black rice is usually served with alioli, garlic mayonnaise. I chose to use the shrimp as a topping and roasted peppers as a garnish, so I omitted the alioli.
Black Rice, like paella, although it’s not loaded with protein material, can be served as a main dish if preceded by hors d’oeuvres, salad or a starter. It also makes a dramatic starter. Instead of bringing the paella pan to the table, serve the rice and its garnishes already plated. Black rice makes a good side for a plate of grilled jumbo shrimp or other shellfish.
Black Rice with Garlic Shrimp
Arroz Negro con Gambas al Ajillo
If you use store-bought fish stock, you may not need to salt the rice. Taste the liquid in the pan and add additional salt as needed. (A recipe for seafood stock is here.)
Frozen squid or cuttlefish ink (tinta de calamar) in small packets (sobres) can usually be found where frozen fish is sold. I also have found a pasteurized version in jars at some fish markets. The ink, a thick gel, is also widely used to make black pasta and black breads (hamburger buns, for example).
How much ink to use? Start with 1 tablespoon for the given amount of rice. I added another spoonful, because I wanted it really black. Stir the ink into some of the cooking liquid before adding it to the pan. Fresh (never frozen) squid have usable ink sacs. But, it takes quite a few of them to make enough ink to color the rice.
Serves 4-6.
12 ounces cleaned squid
3 tablespoons olive oil
3 ounces chorizo, diced
¾ cup chopped onions
½ cup chopped green pepper
1 clove garlic, chopped
½ teaspoon pimentón de la Vera (smoked paprika)
2 medium tomatoes, grated (½ cup pulp)
1 ½ cups València rice
1/3 cup white wine
1-2 tablespoons squid or cuttlefish ink
4 ½ cup fish or shellfish stock, heated
Salt
Pepper
Sautéed red peppers, to serve (recipe follows)
Garlic-fried shrimp, to serve (recipe below)
Sliced lemon, to serve
Cut the tube-shaped squid body into 1-inch pieces. Cut tentacles in half if they are large. Pat the squid dry.
Heat the oil in a paella pan. Fry the diced chorizo. Skim it out and reserve it. Add the pieces of squid and sauté them on moderate heat for 5 minutes. Add the onions, green pepper and garlic. Sauté them until onion is softened, 5 minutes. Stir in the pimentón and mix in well. Add the grated tomatoes. Continue cooking the sofrito 5 minutes.
Add the rice and fry it 1 minute. Add the wine and cook off the alcohol. Mix the squid ink in ½ cup of the stock. Stir it into the rice. Add 3 ½ cups of the hot stock. Return the pieces of chorizo to the pan (save a few pieces of chorizo to garnish the top of the rice once cooked). Taste the liquid and add salt to taste. Season with pepper.
Bring the liquid to a boil, reduce heat slightly so the rice keeps bubbling. Stir well to mix all the ingredients, then try not to stir again. Cook the rice 10 minutes.
Lower heat and add additional stock as needed. Cook until the rice is just tender and liquid is absorbed. Remove the pan from the heat and cover it with foil or a cloth. Allow to rest at least 5 minutes to finish cooking.
Serve the black rice in the pan or plated accompanied by the sautéed red peppers and the garlic shrimp. Garnish with lemon slices.
Sautéed Red Peppers
Pimientos Rojos Salteados 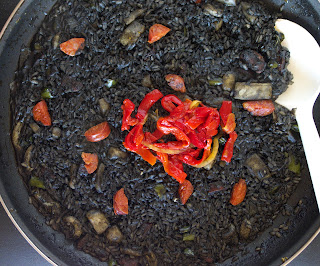 Use canned piquillo peppers, fire-roasted red peppers or roast your own bell peppers for this garnish.
Roasted and peeled red peppers
Olive oil
Slivered onions
Salt and Pepper
2 teaspoons Sherry vinegar
Cut the peppers into thin strips. Heat oil in a small skillet and sauté the peppers with the onions. Season with salt and pepper. Cook until onions are softened, about 8 minutes. Add the vinegar and cook 1 minute longer. Serve hot or room temperature as an accompaniment with the black rice.
Shrimp Sautéed with Garlic
Gambas al Ajillo
This method is slightly different from the tapa-bar version of gambas al ajillo. Served as a topping for the Black Rice, it has lemon juice and chopped parsley added.
3 tablespoons olive oil
2 cloves garlic
1 tiny chile
6 ounces small, peeled shrimp
2 tablespoons fresh lemon juice
1 tablespoon water
1/3 cup finely chopped parsley
Flaky salt
Heat the oil in a small skillet. Slice the cloves of garlic thinly crosswise. Add to the skillet with the chile. Sauté until garlic begins to turn golden. Skim out the chile and discard it. Add the shrimp to the oil, Stir-fry them just until they begin to turn pink. Add the lemon juice and water. Remove the skillet from the heat. Stir in the parsley immediately before serving the shrimp. Sprinkle with flaky salt.
Spoon the shrimp over the black rice in the pan or plated.
More ways to make paella:
Rustic Valencia Paella.
Paella, My Way.
Boneless Paella (Parellada).
Paella "Made in USA".
Paella with Chicken and Seafood.
Rice on the Side (Abanda).
Brown Rice Vegetarian Paella.
Low-Carb Paella.
Not Paella.
Rice with Clams.
Mercado Little Spain in New York City is marking World Paella Day on September 20. Or, get your paella-making kit from their product selection. 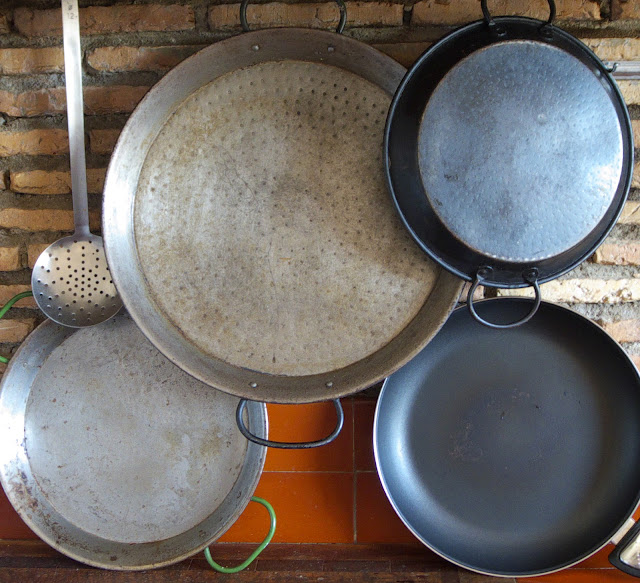