One of my readers (an Australian living in Sevilla) once asked me for a recipe for solomillo al whisky—pork tenderloin in whisky sauce. I had never come across such a dish in Spain, so I suggested that whisky wasn’t Spanish and maybe he could use Sherry or brandy instead of whisky.


Sorry, Ian, if I sounded like a silly know-it-all. I’ve since learned that pork in whisky sauce is muy sevillano, a popular dish in many tapa bars there. I’ve never, however, discovered how a sauce made with whisky—as in Scotch—came to be part of Sevilla cooking.


Just speculating: Maybe it’s because a cook ran out of brandy and decided to substitute some whisky in the sauce. Or, maybe it’s an indicator of the relationship between the Sherry trade and whisky distillers in Scotland. Sherry casks (Jerez, where Sherry is made, is very close to Sevilla) are used in ageing some of the finest whiskies. Or maybe a bar cook decided that cheap-o Spanish-made whisky wasn’t good enough to drink, but was fine for cooking.

I’ve got to say, whisky makes great gravy! It’s easy to make and would go with almost any roast—beef, pork, turkey—or steak, chops.

You don’t need to use finest single-malt whisky for this recipe (although, it would probably be fantastic). Ordinary blended Scotch is fine. Brandy de Jerez (brandy made in Sherry-land) is a fine substitute. As are other whiskies. (I saw one on-line recipe illustrated with a bottle of Canadian Club.)

The only trick to this recipe is not over-cooking the pork tenderloin. Tenderloin is tender, but lacks fat to keep it juicy. Overcooking makes it dry. After searing, finish cooking the meat in the whisky sauce, but take it out when the medallions are still slightly pink in the center.

Browning a wedge of onion in the oil before adding the whisky and stock helps to give the sauce a deeper color. The garlic cloves are unpeeled. That prevents their scorching and turning bitter. They can be skimmed out or served with the meat and sauce, as you prefer.

In Sevilla, pork tenderloin in whisky sauce is usually served with potatoes—fries, shoe-string, pan-fried or mashed. Plenty of bread, too, for the gorgeous gravy. 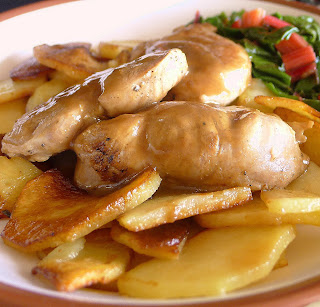 Serves 4 as a main dish.

Sprinkle the meat on all sides with salt, pepper, thyme leaves, lemon zest and 1 tablespoon oil. Allow it to come to room temperature (at least 1 hour).

Cut the meat crosswise into 1-inch medallions. Brush a heavy skillet with 1 tablespoon of oil and heat. Sear the pieces of meat until nicely browned on both sides. The meat will not be cooked through. Remove from the skillet and set aside.

Add 2 tablespoons oil to the skillet and reduce heat to medium. Lightly crush the cloves of garlic to split the skins, but do not peel them. Add to the skillet with the wedge of onion. Sauté, turning frequently, until onion is well browned.

Add the whisky to the pan. Cook (or flambé) until alcohol is cooked off, 1 to 2 minutes. Scrape up any browned bits in the skillet. Add the stock and a sprig of thyme.

Stir the cornstarch into ¼ cup water until smooth. Stir into the whisky in the pan and stir until sauce thickens and is smooth. Season to taste with salt and pepper. (If stock is salty, more salt may not be needed.) Add the lemon juice and the butter, if using. Simmer the sauce 10 minutes.

Return the pork and all the accumulated juices to the skillet. Cook gently, turning the pieces once, until pork is hot and just barely cooked through, 3-4 minutes.

Discard the piece of onion and sprig of thyme. Cloves of garlic can be left in the sauce, if desired. Serve pieces of meat and sauce garnished with chopped parsley. 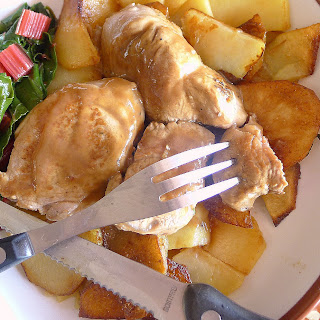