Artichokes are complicated. Structurally, they’re complex. Taste-wise, too, artichokes have a unique blend of sweet, bitter, earthy, tannic, floral, creamy.  They are a pain to prep because so much of the vegetable is inedible.  But, they’re worth the trouble!


Last year in artichoke season, I wrote about artichokes, simplified—just cook ‘em and eat ‘em, no fuss with trimming, dipping in lemon water (see the link below). But this year I’ve decided to revert to a recipe as complicated as the vegetable—stuffing those delectable little hearts. Here we go.


Spanish artichokes (alcachofas and also alcauciles) are generally a small variety, even when completely mature. They are very different from the enormous ones I found in markets in France and Turkey, where the trimmed hearts were fist-sized. With small artichokes, in order to make a hollow for stuffing, it’s necessary to leave a rim of the leaves, which, with slow cooking, become tender enough to eat.

The recipe makes enough stuffing for eight large or 12 small artichokes. If there is extra meat mixture, shape it into small balls and add them to the pan to cook with the artichokes. Serve the artichokes and sauce, one or two per person, as a starter. Or, serve them on a bed of rice with three or four per person as a main course.

As the artichokes are trimmed and hollowed, drop them into a bowl of water with lemon juice to prevent their oxidation (darkening when exposed to air).

Dipping the tops of the stuffed artichokes into beaten egg and frying them briefly creates a crust that prevents the filling from being dislodged while cooking.

Choose a pan in which the stuffed artichokes will fit snugly in a single layer. You want to keep them upright, so tuck the stems and chunks of carrots and onions around them. Add enough hot water to almost cover them. The cooking liquid, pureed, becomes the sauce for the artichokes.

Place the ground beef in a bowl. Add the garlic, parsley, 1 teaspoon salt, pepper and cumin. Separate 1 ½ tablespoons of the beaten egg and place it in a shallow bowl. Add remaining egg to the ground meat. Mix well. Allow the meat to stand while prepping the artichokes.

Heat 1 tablespoon of oil in a skillet. Dip the artichokes, filled side down, one by one, into the reserved beaten egg. Fry them, dipped side down until golden. Remove.

Place the stuffed artichokes in a pan in a single layer. Tuck the stems, chunks of carrot and wedges of onion between them to keep them upright. Add the bay leaf, 1 teaspoon salt, 2 tablespoons of oil and hot water to ¾ depth of the artichokes. Bring to a boil, reduce heat and cook gently until artichokes are very tender, 30 to 40 minutes.

Remove artichokes and stems to a serving dish. Discard bay leaf. Puree the carrots and onions in a blender with the remaining liquid. Serve the sauce with the artichokes. Serve hot or room temperature. 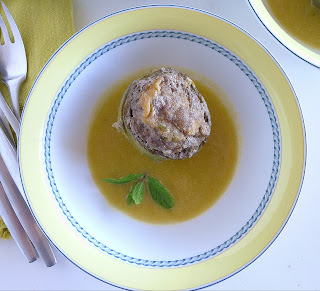