VEAL STEW FOR ONE

Sometimes, when I know I’m going to be the only one for dinner, I buy a very small portion of an expensive ingredient. Today. the local butcher had a tray of veal cubes. Real veal, a rosy-pink-fleshed meat.  At €13 per kilo (about $7.25 per pound), this meat was beyond my budget. I bought just enough for a one-person serving.

In Spanish, the word “ternera” translates as “veal.” Except it’s hardly ever real veal.

Real veal is either designated “lechal,” meaning the meat comes from a very young, milk-fed animal, under six months at slaughter, or “ternera rosada,” pink veal, from an animal under 1 year that has fed on grains. Both are very lean, fairly delicate in flavor compared to meat from an older animal.

The problem is that, in a Spanish butcher shop, “ternera” is the word popularly used for “beef.” (The correct designations are “añojo;” yearling, “novillo/a,” “baby beef,” a bull or heifer between 24-48 months, and cebón, steer, up to 48 months. Real beef, buey, or vaca, cow, comes from animals slaughtered at more than 48 months.

Veal known as ternera de Ávila comes from animals of the Avileña-Negra Ibérica breed and has protected geographic indication (IGP).


The veal cubes I bought were cut from the aleta, a section of the breast. They were going to need long, slow cooking. I braised them with strips of roasted red peppers and mushrooms in a wine sauce and finished the dish with sliced olives.

The meat was fork-tender in about an hour and a half of simmering. But, it was dry. Not really worth the premium price for veal. Next time, I’ll make the same recipe with “beef,” or even with boneless chicken thighs.

This recipe for ternera con fritada starts with a sofrito (fritada is a word meaning a sautéed mixture, similar to sofrito) of onions, peppers and mushrooms. I used two (185-gram) cans of piquillo peppers (about 20 small peppers) for the strips of roasted red peppers.

Spanish style, the veal stew would be served with patatas fritas, fries. But I like it better with cooked rice or noodles.

Sprinkle the veal with salt, pepper and thyme. Dust it with flour and pat off excess.

Heat 2 tablespoons of the oil on medium heat. Brown the cubes of meat on all sides. Remove with tongs and set aside.

Return the veal to the pan. When the liquid is bubbling, turn down the heat to a simmer and cover the pot. Cook, stirring occasionally, until meat is fork tender, about 1 ½ hours. Stir in the olives and heat.

Serve the veal sprinkled with parsley. 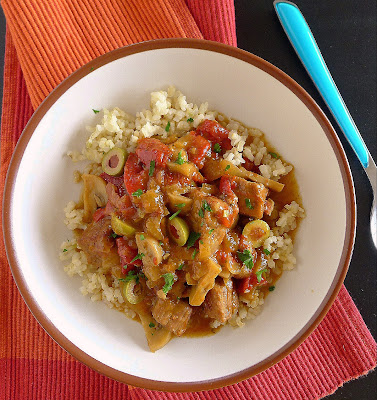