MY HOMAGE TO CATALONIA


My homage to Cataluña is, as you might expect, a culinary one. I joined with millions of Catalans the day after Christmas in eating canelones. Yep, filled pasta tubes, a traditional Catalan dish for the day of San Esteban, December 26.


Dinner might be the only thing the Catalans can agree on. Whether you’re an independista or not, speak catalan or castellano, canelones are on the menu.

Cataluña-Catalunya-Catalonia (the region of northeast Spain encompassing the provinces of Barcelona, Girona, Lleida and Tarragona) declared itself an independent republic back in October, following a referendum (illegal, according to the national constitution) in which a majority (with only 43 percent voter participation) voted to secede from the kingdom of Spain.

The declaration of independence precipitated a constitutional crisis. The central government in Madrid, which had tried to prevent the referendum, invoked an article of the constitution that allowed it to impose direct rule over Cataluña and call for new elections.

The elections took place right before Christmas, December 21. Voter turn-out was an amazing 82 percent. But, to the distress of the central government’s ruling party, the independistas still hold a slim majority (the three separatist parties won 70 seats in the Catalan Parlament; the combined unionist parties that want Cataluña to remain part of Spain won 65).

What happens next is unclear. Spaniards all—including the Catalans—are occupied with holiday festivities, so the crisis has somewhat receded. (The holiday does not wind down until January 6, el día de los Reyes Magos.) Then we shall see. Meanwhile, have another serving of canelones.

Canelones (canelons in Catalan) became popular in Cataluña in the 19th century. The filling originally was made with leftover cooked meat, poultry and sausage from the escudella i carn d’olla, the grand one-pot meal traditionally served on Christmas day (the Catalan version of cocido).


Packaged Spanish or Catalan canelones are flat sheets (placas) of dry pasta, somewhat like lasagne. Two well-known brands are El Pavo and Gallo. After cooking (or soaking, in the case of pre-cooked pasta), the sheets are rolled around the filling. (If using ready-made cannelloni tubes, do not cook them before filling.)

The cannelloni can be filled and rolled and the béchamel sauce prepared in advance. Place the filled cannelloni in the oven dish with sauce, without adding the grated cheese, and refrigerate. Bring to room temperature before adding cheese and baking the pasta.

Restaurant versions of Catalan canelones often are finished with shaved black truffles. I had no truffles, but studded the sauce with cloves of black garlic.

Should you have more of the meat-chicken filling than you need to fill the cannelloni, spread it on toast, add a pickled onion and call it pâté.

Grind this mixture in a food processor. Place in a bowl and add chicken stock a few tablespoons at a time to make a smooth mixture that is moist, but stiff enough to be shaped into logs.

Cook the cannelloni sheets according to package directions. (Add them one by one to a large pan of boiling, salted water. Cook 6 minutes. Remove them one by one with a skimmer and place them in a single layer on a dampened kitchen towel. Cover with another damp towel.)

Lightly oil an oven-safe gratin dish. Spread some of the béchamel sauce in the bottom of the dish. Working with one sheet of pasta at a time, place a log of the meat filling on it and roll the pasta around the filling. Place the filled pasta roll in the dish. Continue, using all of the pasta squares.

Nap the cannelloni with remaining béchamel sauce. If desired, make squiggles of tomato sauce on top of the rows. Stud with truffles, if using. Sprinkle grated cheese over the top. Sprinkle with pimentón, if desired.

Bake the dish of cannelloni until sauce is bubbling and cheese is melted, about 15 minutes. Turn the broiler/gratin on high. Place the dish under the broiler until cheese is golden-brown, 2 to 4 minutes. (Watch carefully so top doesn’t burn.) 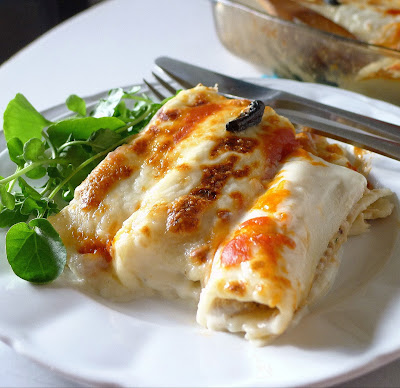 If making the sauce in advance of using with the cannelloni, cover the surface with plastic wrap and refrigerate. Heat the sauce slightly and whisk it smooth before spreading in the oven dish for cannelloni.

Heat the oil in a saucepan. Stir in the flour. Cook it on medium heat, stirring, for 3 minutes. Do not let the flour brown. Whisk in the milk. Continue stirring or whisking until the sauce thickens. Season with salt, pepper and nutmeg. Cook the sauce 10 minutes.

For some background information about the Catalan political situation, read this article by journalist Lisa Abend:
https://www.theatlantic.com/international/archive/2017/10/catalan-spain-referendum-independence-puigdemont/544307/?utm_source=fbb