My aerobics teacher, Reme, came into morning gym class with bags of weeds, offering them to anyone willing to try. “Verdolaga,” she said. “It grows wild in my garden. I use the leaves in salads.” I pulled one of the glossy leaves off a stem and tasted. A little tart, nice.


“Do you use it in traditional cooking?” I asked. “No, not really. People feed it to the animals, but don’t cook with it.”


An on-line search revealed that verdolaga is purslane, a weed, an herb, a wild green. It’s used in Greek and Middle Eastern cooking, one of many wild herbs used in salads and cooked dishes. The Mexicans favor it, braised with pork or chicken in a green chile sauce with tomatillos.

I also discovered that verdolaga, common purslane (portulaca oleracea) is a real superfood, rich in anti-oxidants, vitamins and minerals and amazingly high in heart-healthy Omega-3 fatty acid. A purslane salad and a heap of sardines (also rich in Omega-3) would be a real heart-protective meal. Eat your weeds, kids!

Wild purslane grows in lawns, along roadsides, in fields. It should be picked from places where it’s not subject to pollution or pesticides. (Hey, it’s growing in my garden too!) It may turn up at farmers’ markets too, as it seems to be trending. Stems, leaves and yellow flowers are edible. Place in a bowl of water and swish them around. Drain. They can be used raw or cooked. I used the leaves in a salad, combining them with watermelon, cucumber and feta cheese. I made a traditional vegetable dish, called zarangollo, cooking purslane with the vegetables. 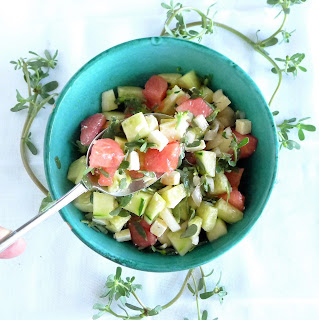 The salt in the dressing draws the liquid out of the watermelon and cucumber. Either add the salt, oil and lemon juice to the salad immediately before serving. Or, mix it all together and refrigerate. When ready to serve, use a slotted spoon to scoop the salad out of the accumulated juices. 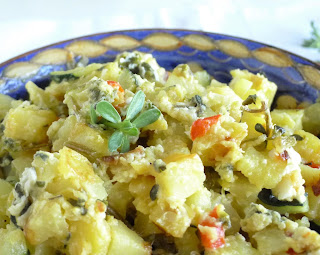 Zarangollo is a popular dish in the Murcia region (eastern Spain). It usually consists of zucchini and potatoes cooked with onions in olive oil and scrambled with eggs. It´s served as a tapa or light supper dish. This version has wild purslane added to the vegetables.

Blanch the purslane in boiling water for 1 minute. Drain and reserve.

Heat the oil in a cazuela or large skillet. Add the potatoes and cook them, covered, stirring frequently, on medium heat 10 minutes. They do not need to brown.

Break eggs into the vegetables and stir them to mix. Cook only until eggs are set.

Another recipe for zarangollo is here.

A recent story about purslane in the Chicago Tribune is here.