DINNER, OFF THE SHELF

What’s for dinner? I’ve got a couple of chicken breasts in the fridge, but chicken breasts can be pretty dull without something to jazz them up. Here’s an open can of piquillo peppers, a jar of anchovy-stuffed Sevilla olives, most of a can of chopped tomatoes, an open bottle of Manzanilla Sherry---  Sounds like a plan! Chicken breasts, Sevilla style, with olives. Cans of olives on the pantry shelf provide the perfect way to jazz up foods from chicken to meat to fish to vegetables to salads to grains.

The recipe, chicken breasts Sevilla style, takes the name of Sevilla because that province in Andalusia (southern Spain) is a top producer of table olives, which are widely used in the traditional cooking. (Spain, according to ASEMESA ,  the Association of Spanish Table Olive Exporters, is the world leader in table olive production.)

I served the chicken with a side of quinoa, which, incidentally, also is produced in Sevilla province.


Use small chicken breasts, one per serving (about 5 ounces each), or two or three larger ones. Small ones can be served whole; large ones need to be sliced before serving. Adjust cooking times for size. Breasts can be skinned or not, as you like.

Use Sevilla-style pitted manzanilla olives, preferably stuffed with anchovies. Use the brine from the olives as part of the cooking liquid. Manzanilla is fino Sherry from Sanlucar de Barrameda, down the Guadalquivir river from Sevilla. Any dry Sherry can be substituted. No canned piquillo peppers? Use any roasted and peeled red pepper or fresh bell pepper.

Sprinkle the chicken breasts generously with salt and pepper and allow them to come to room temperature.

Heat the oil in a skillet and brown the breasts on both sides. Remove them from the pan.

Add the onion, peppers and garlic to the skillet and sauté until onions are softened, about 5 minutes. Add the red pepper flakes and tomatoes, turn up the heat and fry until tomatoes are slightly reduced, 5 minutes.

Add the manzanilla, olive brine and sprig of thyme. Simmer about 8 minutes. Return the chicken breasts to the pan. Cook, covered, until they are just cooked through, about 10 minutes for large, thick ones.

Add the olives to the pan and cook 2 minutes longer.


Remove the breasts to a cutting board. Allow them to rest 5 minutes, then slice them on the diagonal. Serve the chicken with the olive-pepper sauce. 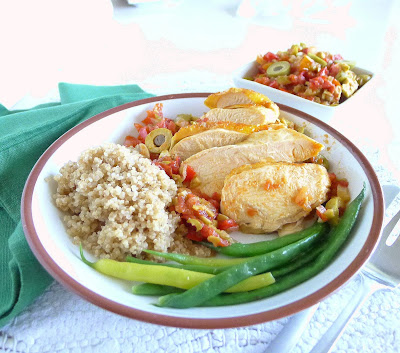 "HAVE AN OLIVE DAY!"  By coincidence, my recipe using table olives coincides with the launch of a campaign to promote Spanish table-olives in the US. Chef José Andrés, Michelin-starred restaurateur and recipient of a 2015 National Humanities Medal in the US, unveiled the campaign at Spanish restaurant, Toro, in New York on May 17. Sponsored by the Spanish Inter-Professional Table Olive Organization from Spain, the campaign will run through 2019 and will educate US consumers on the different variations of olives and their culinary uses.”

Some more recipes with olives, to see you through the next two years of “olive days”: