Wildlife comes with the territory. Where I live, on a hillside at the edge of protected sierra pine forests, at the head of a steep arroyo where a trickle of water runs year-round, I have become accustomed to various sorts of birds and beasts. Foxes, genets, mongooses, martens, rabbits, an occasional mountain goat. Plenty of geckos. Oh, and to the distress of some of my guests, field rats that gorge on wild figs.

But recently I have had a new invader. Something digging up the damp earth under a woodpile, trampling the vegetable garden, even overturning big flower pots on a side patio. This was something considerably larger than your standard mole or marauding dogs.

One night, just outside my bedroom window, I heard loud grunting and snorting sounds. The next morning I discovered my plot of newly-planted onions had been rooted up. My invader was a wild boar. Maybe several of them. They root for grubs in damp earth beneath stones, woodpiles and in gardens. (But, they don’t eat the plants!)

Boar have become a real nuisance in this region of southern Spain. They’ve left their wilder habitats to forage in greener pastures, in the lush golf courses of this resort region. Organized hunting and trapping help to control the populations. Unfortunately, these swine have migrated to my hillside.

Initially, I was a little fearful of coming face-to-face with a wild boar in my garden. But it seemed to roam only at night. My son constructed a trap, a pit covered with brush, but we caught not a thing. I hate to think what we would have done if one had been ensnared!

While shopping recently at HiperCor, the supermarket of El Corte Inglés, I found a selection of wild boar meat. Fantasizing the demise of my neighborhood boar, I bought a chunk of lomo, boneless loin. Pretty expensive, €24 per kilo ($11.50 per pound).

How to cook it? Red wine and autumn wild mushrooms? Sweet-sour flavors (Sherry vinegar and PX sweet wine)? Chestnuts? In memoriam of my destroyed onion patch, I decided to cook it encebollado, in a red wine-onion sauce.

Wild boar is somewhat like pork, but a little gamier and a lot leaner. Tender cuts such as loin and tenderloin can be cooked quickly and served slightly pink, while cuts from the shoulder or leg need long braising.

I maybe made some wrong choices. After marinating, I slow-cooked the loin. Although it was tender, it was awfully dry.  I probably won’t buy boar again. I used the rest of the delicious onion sauce to cook a chunk of pork loin. Delicious! And, should I ever catch a boar, I’ve got some recipes waiting.

Place the loin in a glass or earthenware bowl just large enough to hold it. Add the wine, bay, orange slices, peppercorns, cloves, juniper berries and sliced leek. Cover and refrigerate 12 to 24 hours, turning the meat at least once

Remove the meat and pat it dry. Strain the marinade and save the liquid. Discard the solids.

Cut the onions in half, then slice them crosswise. Heat the oil in a heavy pan. Add the onions and cook slowly, stirring frequently, until they are deep golden brown, about 15 minutes. Tilt the pan so the oil drains to one side and lift out the onions and reserve them.

Lightly dust the meat with flour on all sides. Place it in the pan and brown on all sides. Add the carrot, garlic and browned onions. Add the strained red wine marinade. Cook the meat, covered, turning occasionally, until it is tender, about 1 hour. If liquid cooks away, add a little water or meat stock. The onion-wine sauce should be quite thick, almost jammy.

Let the meat rest 10 minutes on a cutting board. Slice it crosswise and serve with the hot onion sauce. 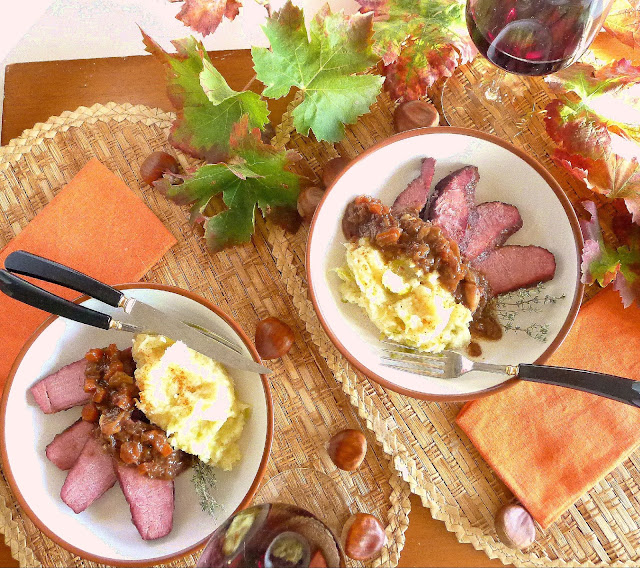