THE QUAIL HAVE HATCHED!

Which came first, the chicken or the egg? In my kitchen lab, the egg preceded the bird—last week I had quail eggs, this week I’ve got the birds.


Actually, I bought the eggs and quail at the same time, planning a blog with the “small is delicious” theme. But I got so carried away with those quail eggs, I couldn’t seem to settle on just one recipe.


Cute little quail are farm-raised, so they’re widely available. A single quail, weighing about six ounces, does not a dinner make. So serve quail as a starter or light supper dish or combine them with beans or lentils and vegetables in a stew.

Red bell peppers flavor the quail and keep them moist. A stuffing with morcilla (blood sausage) bastes them from the inside out. If you cannot get morcilla sausage, add a spoonful of pimentón (paprika) and a pinch of clove and cinnamon to the pork sausage.

Place bell peppers on a baking sheet and roast them until skin is slightly blistered (not blackened) and flesh is soft (not collapsing), about 20 minutes.

When peppers have cooled enough to handle them, remove as much of the skin as possible. Cut off tops, discard stems and seeds.

Rinse quail in running water. Drain them and pat dry. Sprinkle with salt.

Heat 1 teaspoon oil in a small skillet and sauté the shallot until softened, 1 minute. Add the morcilla and fry for 3 minutes, breaking up the pieces of sausage with a wooden spatula. Add the raisins.

Remove skillet from heat and stir in the bread crumbs. Stuff the quail with the sausage-crumb mixture, using about ¼ cup for each.

Heat remaining 2 tablespoons oil in a skillet and brown the quail on all sides, about 3 minutes. Remove and reserve.

Working with one quail at a time, tuck the legs against the body and insert the quail, legs first, into a pepper. Place in a baking dish. Pour over the wine and boiling water. Bake the quail-stuffed peppers, uncovered, until peppers are very tender and quail cooked through, about 1 hour. If pan liquid cooks away, add additional ½ cup boiling water.

Allow the peppers to stand 15 minutes. Serve them hot, with pan juices spooned over. 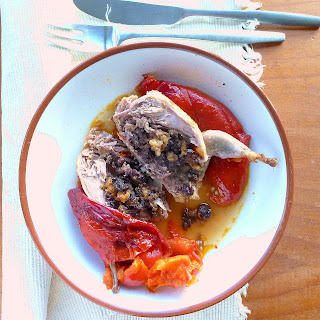 At the weekly farmers’ market in the Basque town of Guernica, I met a man selling pochas, fresh-podded white beans, also called shelling beans. I asked to buy a half-pound, just to take home a tiny sample. He refused to sell them to me. He swore that his beans were so good that, when I tasted them, I would kill myself for not having purchased more.

They were, indeed, delicious. Thankfully I had purchased a sufficient quantity so that suicide was not contemplated.

I fully intended to let my garden green beans mature so I would have home-grown pochas. As the pods get big and leathery, the beans inside plump up. Depending on the variety, they may be white, green, brown or speckled. But I kept picking the green beans when they were small and tender, so I never got a heap of shelling beans.  However, I found jars of cooked pochas at the grocery store.

Cut up the quail. Separate boneless breast fillets and reserve them. Separate the legs and remaining carcass.

Put the beans to cook in water to cover with bay leaves, sprig of thyme and onion slice. Bring to a boil, skim, then cover and simmer. Fresh shelling beans need about 30 minutes cooking time.

Heat 2 tablespoons of oil in a skillet. Sauté the quail legs and carcasses on a high heat until browned. Add them to the beans.

Add the diced bacon, onion, carrot, pepper and garlic to the skillet and fry until lightly browned. Add the tomatoes, salt and pepper and 1 pinch of thyme. Add the vegetables to the beans with the wine and 1 cup of water. Bring to a boil and simmer 30 minutes.

Remove and discard the quail carcasses.

Shortly before serving, season reserved quail breasts with a pinch
of thyme, coarse salt and freshly ground black pepper. Heat remaining oil in a skillet and sauté the breasts about 2 minutes on each side.

Serve the beans with the quail legs in deep plates and place a sautéed breast on top of each serving. Sprinkle with chopped parsley. Serve green chiles to accompany the beans. 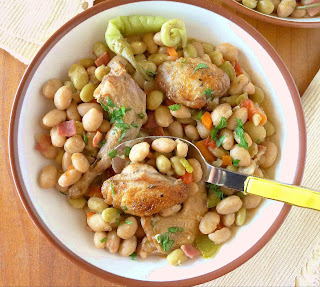