Chicken Breast, Inspired by a Chef

In the shadow of Toledo’s grand Santa María cathedral is the eponymous restaurant of Chef Adolfo Muñoz, passionate proponent of everything gustatory.


Adolfo has one of the finest wine cellars in the country, situated below street level in an excavated house dating back to Toledo’s  medieval Jewish quarter. He produces his own “garage” wine, Pago Del Ama Colección, from grapes grown on his estate, cigarral, within the municipality of Toledo. He’s a television chef and an enthusiastic promoter of La Mancha’s great products, such as saffron, partridge and olive oil. (Toledo is the capital of Castilla-La Mancha in central Spain.)

This recipe is adapted from a dish I savored at Restaurante Adolfo, where it was prepared with squab breast cooked very rare. Not being able to lay my hands on squab (although, I am occasionally tempted to net a couple of the wild doves that drink from the water bowl on my patio), I have substituted chicken breasts.


Chicken breasts should be more thoroughly cooked, but take care not to overcook them. They should still be tinged with pink in the center. I used two enormous chicken breast halves, to serve 4 persons. But you could use 4 individual-sized breasts. The vegetables should be slightly crunchy and the rice al dente.

I’ve given a recipe for making your own chicken broth. The broth flavors the rice and goes into the chicken pan juices. Freeze what’s left to use as the starting point of any soup. 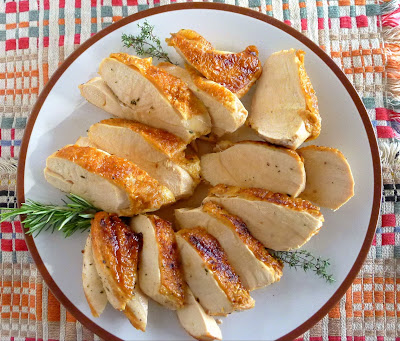 Heat the oil in a heavy pot and brown the chicken carcass or wings with the onion until flecked with dark brown.

Strain the broth, pressing hard on the solids. Discard solids. Let the broth stand 20 minutes. Skim off and discard fat that rises to the top. Set aside 3 cups of the broth to cook the rice and chicken. Reserve the remainder for another use (it can be frozen).

Season the chicken breasts with salt and pepper. Heat a ridged grill pan and brush with oil. Sear the chicken breasts, skin-side down, about 1 ½ minutes. Turn them crosswise and grill 1 minute more. Turn them over and repeat the turns. Remove the breasts to a skillet big enough to hold them in one layer.

In a heavy, dry skillet toast the rice over medium heat, stirring, until it is golden and toasted, about 8 minutes. Reserve.

Add 2 tablespoons hot water to the saffron and allow to infuse.

Add 2 ½ cups of broth to the vegetables. Add additional salt to taste. Bring to a boil. Add the toasted rice and saffron infusion. Boil 3 minutes. Remove from heat, cover tightly, and let the rice set 10 minutes. The rice will be al dente.

Add the wine, thyme, and rosemary to the chicken breasts with ¼ cup of the chicken broth. Bring to a boil, cover, and simmer until they are cooked through, turning once, 10- 15 minutes, depending on thickness. (Add additional broth, if necessary.) 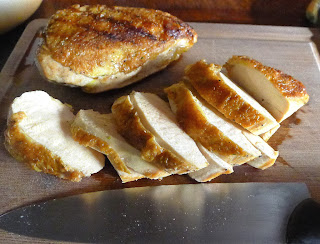 Slice the chicken breasts on the diagonal. Serve with the rice and vegetables.

Bring the remaining pan juices in the skillet to a boil and spoon it over the chicken, rice, and vegetables. 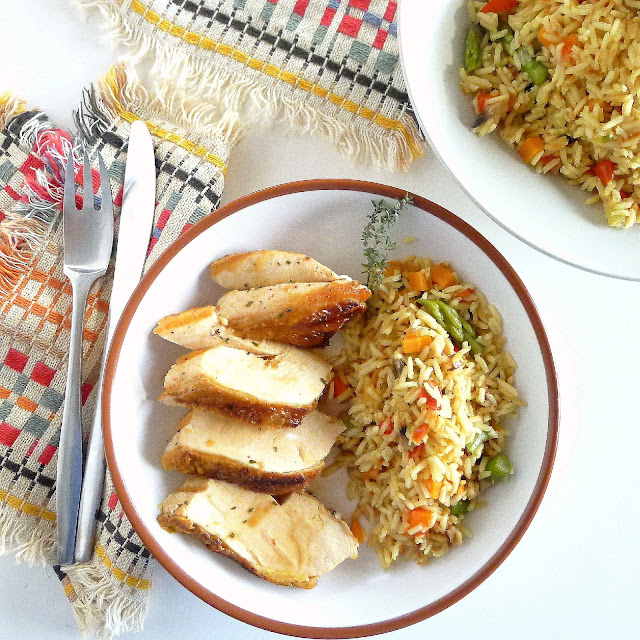 Have a look inside the kitchen at Restaurante Adolfo in Toledo. http://grupoadolfo.com/restaurante-adolfo.html
Posted by JANET MENDEL at 11:38 AM