THE LAST GRILL OF SUMMER?

Fire up the grill! It’s the last weekend of August—occasion for, maybe, the last cookout of the season. The days are getting shorter, the evenings cooler (although the mosquitos haven't abated yet). Soon I’ll be happy to turn on the oven again. But, for now, it’s a grilling feast.


Even though there are only four of us for dinner, I’m making two racks of spareribs, a small chicken and swordfish brochettes. Wrapped in foil and tucked into the coals are potatoes and small, sweet onions. Some tiny eggplant from the garden will be grilled, whole, when the meat comes off. Split open, they need only salt, pepper and extra virgin olive oil for a sensational side dish.

I’ve got a huge sack of carbon de encina, charcoal made from wild holm oak, to supplement the olive wood sticks. They make fragrant coals. A twig of rosemary adds a piney aroma.

The ribs I marinate in garlic, salt, pepper, thyme, parsley and Sherry vinegar for several hours. I wrap them in foil and grill about 20 minutes per side or until tender. I remove the foil and brush them with a barbecue sauce—Spanish molasses, ketchup, more garlic and vinegar. The grill meister (son Ben) lets the ribs glaze, about 5 minutes per side. 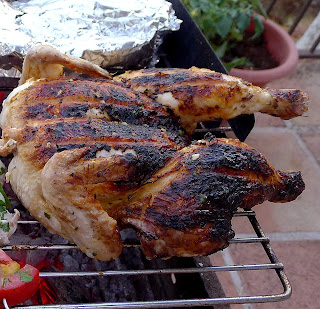 The chicken, a wee bird, is spatchcocked (backbone removed and breastbone slightly flattened). It marinates in the same garlic-thyme-parsley-vinegar mix as the ribs. The chicken needs only about 15 minutes per side over direct heat. (I’m thinking, this grilled chicken is going to be great cut up and folded in pita with tahina for tomorrow night’s dinner.)

The swordfish brochettes are a treat. Many years ago swordfish was very common in local (Mediterranean) fish markets, displayed on the slab in its enormous entirety, including the impressive head with its “sword.” I cooked it frequently.  Now, I find swordfish only in pre-cut steaks and I’m never sure where it’s coming from. (This is labeled—it comes from the southeast Atlantic and has been flash-frozen and defrosted for sale.) In Spanish, swordfish is pez espada, aguja palá, espardate or emperador.


This is one of the ways I learned to cook swordfish way back in the village tapa bar where I learned Spanish cooking. In the kitchen there, the kebabs were laid on top of the gas flame. They can also be cooked on a plancha (griddle) or, best, on a wood-fired grill.

How long to grill them? Obviously, it depends on the fire. These needed about 5 minutes per side (the grill rack is not close to the coals).

The vegetables may not be done in the time it takes to grill the swordfish. If you prefer the onions and peppers cooked softer, skewer them separately and give them more time on the grill.


If swordfish is not available, any “meaty,” solid-fleshed fish can be substituted. Possibilities are monkfish (rape); dogfish shark (cazón) or tuna (atún or bonito).

Remove skin and center bone from swordfish. Cut the fish into 1-inch cubes. Sprinkle it with salt.

In a bowl combine 1 teaspoon salt, parsley, garlic, oil, lemon juice and red pepper flakes and cumin, if using. Add the swordfish cubes and mix gently. Cover and marinate, refrigerated, at least 1 hour or up to 3 hours.

Remove swordfish from the marinade, saving the marinade. Thread the cubes on metal skewers, alternating with tomato wedges, onions and green pepper. 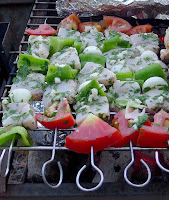 Light a grill. Before placing the brochettes on the grill, brush them with some of the remaining marinade. Use a lemon wedge stuck on a fork to wipe the grill rack (prevents sticking). Grill until fish is lightly browned on one side. Brush with any remaining marinade and turn the brochettes. Grill until done on reverse side. Serve accompanied by lemon.