My crop of bell peppers was so disappointing this year. I grow peppers just for making my favorite stuffed pepper recipe. Sure, I could buy them, but something else stuffable caught my eye at the market. Squid!

The squid’s cylindrical body pouch makes it ideal for stuffing. What’s in the stuffing? I like the ground-meat stuffing that I learned from village cooks years ago. But, the stuffing could be of tuna or other fish; of chopped egg and bread crumbs, of cooked rice.

I’m also partial to fresh tomato sauce, so appropriate this time of year. However, almond-garlic sauce is also used for stuffed squid.

Use this meat stuffing for stuffing peppers, eggplant, tomatoes, onions or just for making meatballs. The chopped tentacles and wing flaps of the squid give the stuffing mixture complexity.

To skin the fresh plum tomatoes, I pop them in the microwave. Then I puree them coarsely in a blender for the sauce. I use a mini-food processor to finely chop the onions.

The squid are good served with rice, pasta or patatas fritas, Spanish fries. 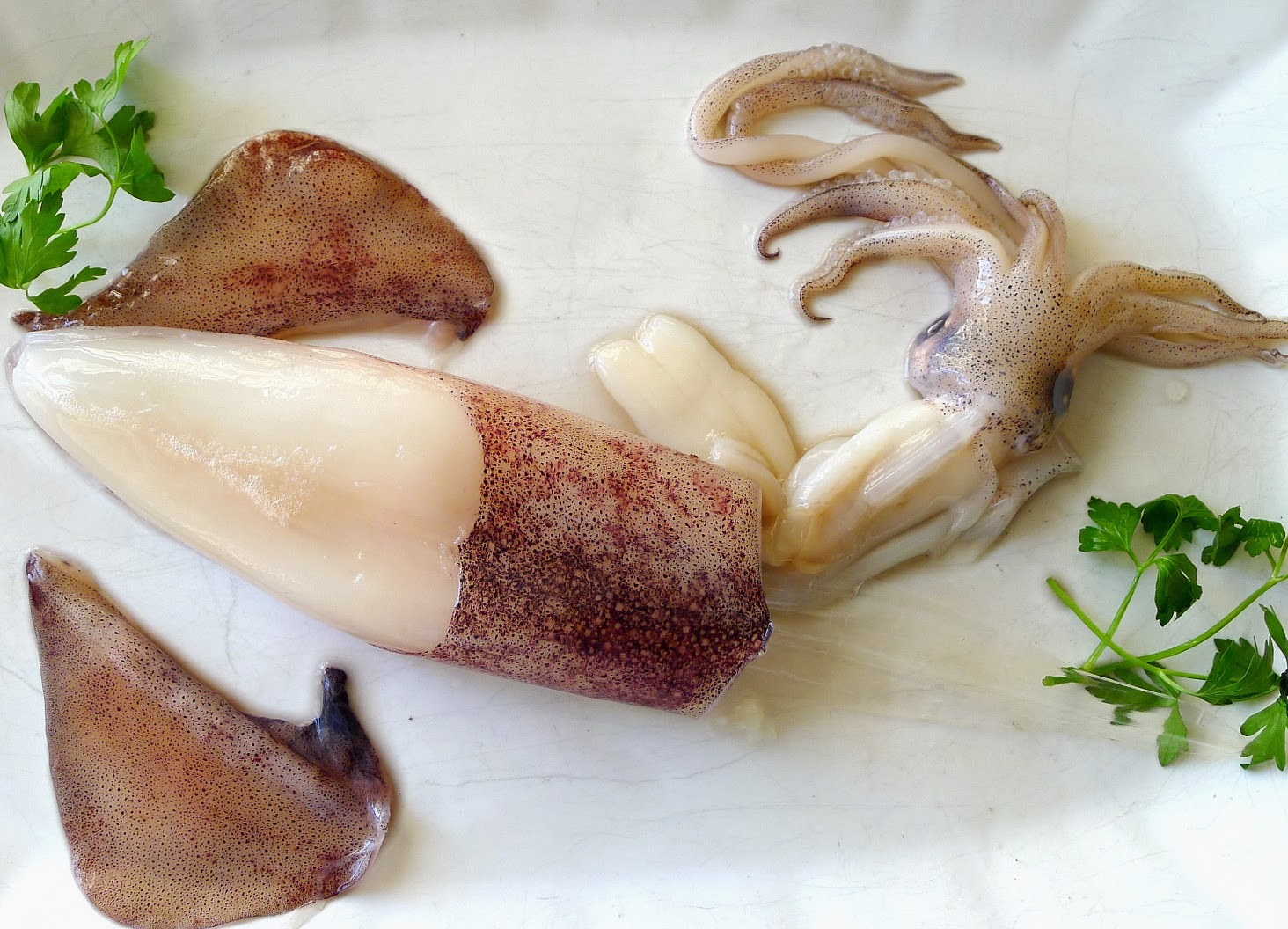 Prepare the squid for stuffing. Pull off the fin flaps and reserve them. Gently pull the head and tentacles out of the body pouch.

The ink sac, a silvery strip on the innards, is not required for this recipe.

Grasp the top of the quill, the squid’s cartilage stiffener—it looks like a strip of clear plastic—pull it out and discard it.


Pull off the dark skin on the body pouch and clean out the insides. Wash the pouch. Remove dark skin from fins as well. The squid is now ready for proceeding with the recipe.


Soak the slice of bread in water to cover until it is softened. Squeeze out the water and crumble the bread into a bowl. Add the beaten egg, chopped ham and pine nuts.

Chop the squid tentacles and fins and add to the bowl. Add the ground meat, chopped cooked egg, parsley, garlic, ½ teaspoon salt, pepper and nutmeg. Combine thoroughly with a fork. Use this mixture to stuff the squid body pouches.

Close them with toothpicks and dust them lightly with flour (flour helps to prevent oil from splattering when frying). Use any remaining stuffing mixture to make meatballs.

Heat the oil in a cazuela or pan. Brown the squid lightly on all sides. Remove them to a plate. Add the onion to the pan and sauté until it begins to brown. Add the tomatoes, bay leaf, wine and 1/2 teaspoon salt. Return the stuffed squid (and meatballs) to the pan with strips of roasted red pepper. Cover partially and simmer 30 minutes. Turn the squid over and cook 30 minutes more. (Test one of the meatballs for doneness. Avoid piercing the squid pouches—they’ll shoot juice like a geyser!) 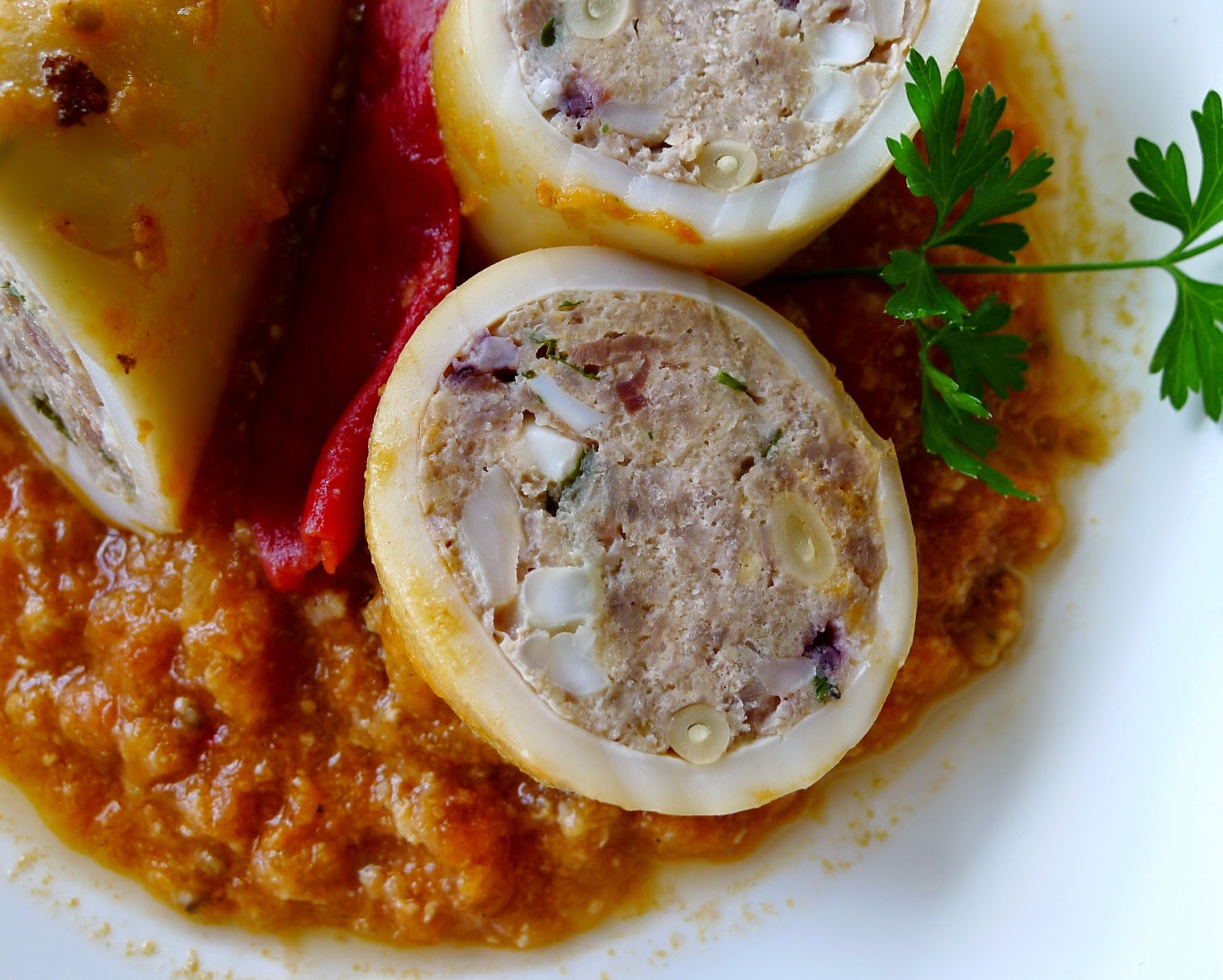 Remove toothpicks from squid before serving. Large squid can be sliced crosswise. 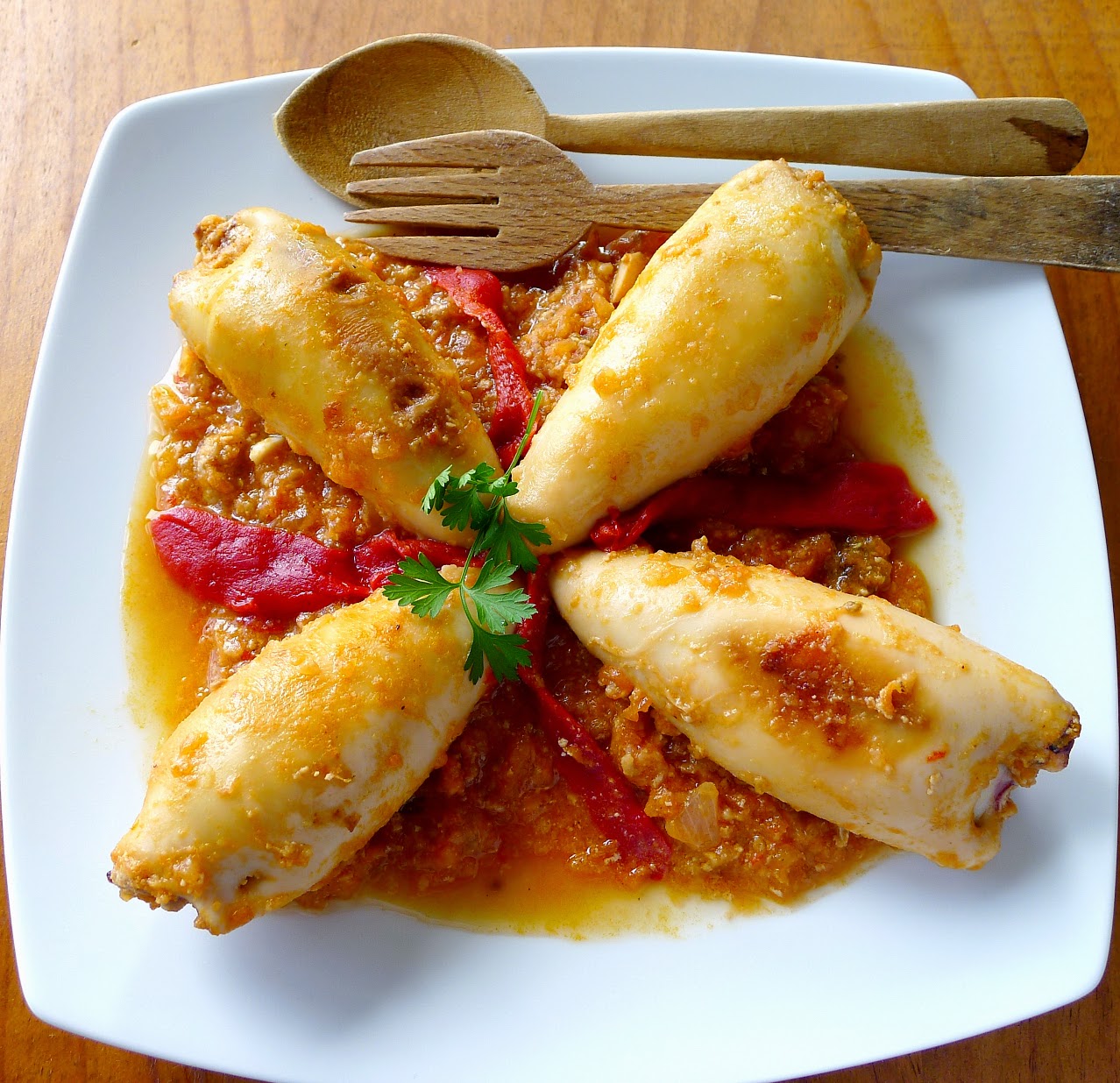