When I started collecting recipes from Spanish cooks—more than 40 years ago—I found very few chicken dishes and dozens of recipes for small game such as rabbit, hare, partridge and turtledove. In those days, a chicken’s purpose was to produce eggs, not dinner, whereas rabbit was free for the shooting.

Nowadays, of course, battery-raised chicken can be purchased cheaply, so chicken is every-day food. While few rural people depend on wild game anymore, rabbit, partridge and quail are also farm-raised and available in supermarkets.

Which is where I found a special on rabbit (€3.50 per kilo) this week. A 3-pound rabbit cost me about $7.00. I had the butcher cut it into eight joints, serving four.

Rabbit can be called “the other white meat.” It’s delicate in flavor, extremely lean and very tender. Adding fat—preferably olive oil—and taking care not to overcook keep the meat from drying out.

From my many rabbit recipes, I chose one that comes from the nearby sierra of Ronda (Andalusia). It calls for “wild mushrooms” and mountain herbs. What I had available was an efflorescence of setas, oyster mushrooms, from a “grow bag,” in a dark, damp corner on my front porch, as well as clumps of “mountain” herbs—thyme and rosemary. Along with the mushrooms and herbs, both brandy and wine produce a delicious gravy.


The gravy, though, reminds me of what Coleman Andrews wrote in his book, Catalan Cuisine, about “the brown food problem... Like traditional cooking around the world, it tends to be monochromatic, murky-looking brown.” Nothing that a sprinkling of chopped parsley or other herb can’t remedy. 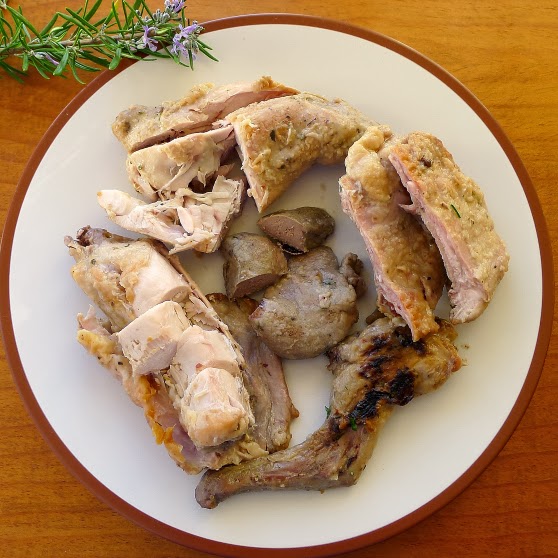 De las gallinas, el suelo; de los conejos, el techo. The best of the chicken is the “floor” (breast); the best of the rabbit, the “roof” (saddle). The meatiest rabbit pieces are the back legs and the saddle, or loin.

Clockwise from the top: back leg and thigh, ribs (rabbit “chops”), front leg, saddle or loin. In the center, pieces of liver.

Cut the rabbit into 8 joints. Combine the flour with the pepper, salt, oregano, rosemary and thyme. Dredge the rabbit pieces in the flour, patting off excess. Reserve remaining flour.

Heat 3 tablespoons of the oil in a deep skillet and brown the rabbit on all sides. Remove the pieces as they are browned.

Add remaining 1 tablespoon of oil to the pan. Add the bacon, mushrooms, onion and garlic and sauté until onions are softened.

Stir in remaining flour in which the rabbit was coated. Add the brandy, wine and water. Return the pieces of rabbit to the pan. Simmer, covered, turning the pieces once, until rabbit is very tender, about 45 minutes. 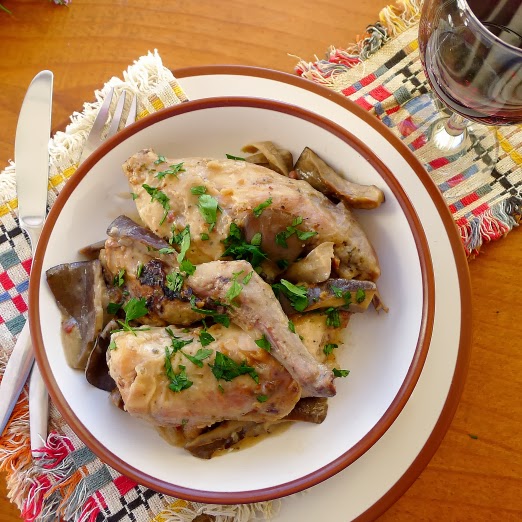