LAMB--SOMETHING SPECIAL FOR MY BIRTHDAY


My birthday is coming up next week. I’ll be dining in, me, family, a friend and a leg of lamb. I love lamb. It’s my favorite meat of all. So, that’s the most special meal I can imagine.

Spain is big sheep country. According to the Foods From Spain web site , Spain has more than 24 million sheep.

Every year a picture appears in the newspapers of flocks of sheep being driven through the Puerta del Sol in the center of Madrid. In times past, when the wool of merino sheep was a source of wealth, the Mesta, a sheep owners’ guild, controlled migratory routes. Vast herds of sheep were moved from northern Spain to southwestern Spain and back again, with the change of seasons, in the trashumancia or transhumance from summer to winter pastures.

With the decline in the wool business, since the 17th century, fewer herds cross the country and most of them are transported by truck or train. In fact, many of the routes have been closed off by fences--or paved over as national highways.

Nowadays, sheep are raised, not for their wool, but for milk (several of Spain’s best-known cheeses, such as Manchego, are made with sheep's milk) and for meat. Lamb from several regions has protected denominations. They are Cordero Manchego, Lechazo de Castilla y León, Ternasco de Aragón, Cordero de Navarra, Cordero de Extremadura and Cordero de Pais Vasco.

I love baby lamb, split and roasted in a wood-fired oven, in the Castillian manner. I love lamb chops on the parilla, grill, with nothing more than alioli, garlic mayonnaise, to go with them. I love the many lamb stews from every region of Spain. 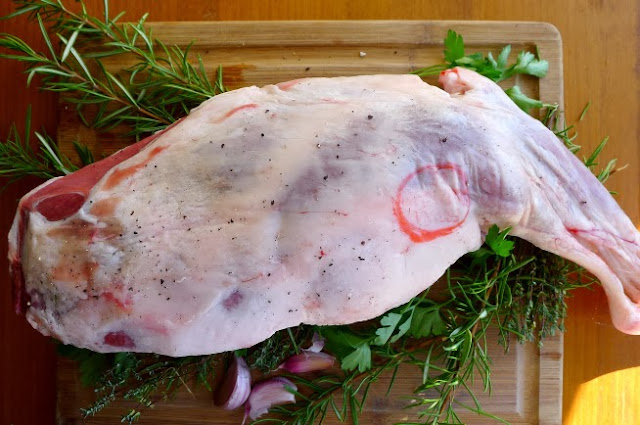 Birthday present to myself, no need for ribbons. My whole leg of lamb weighs 4 pounds 14 ounces. In the US, a whole leg will be marketed considerably larger, from 6 to 7 pounds.


But, for my birthday leg of lamb, I am roasting it, French style, not Spanish. That is to say, I don’t want a slow braise, I want the meat still pink and juicy. I don’t want gravy or sauce. I want to taste the lamb, herb-inflected.

No recipe is required—just fresh thyme and rosemary, garlic, salt and pepper and, most important of all, an instant-read meat thermometer. That roast comes out of the oven when the meat reaches an internal temperature of 135ºF.

Meanwhile, I have been honing my love for lamb by trying other cuts, such as lamb ribs. Like pork ribs, lamb riblets are really fatty. But, if you love lamb as I do, this is good, as the fat conveys the lamb flavor and makes the meat especially succulent and juicy.

Spanish style, this dish is accompanied by patatas fritas, fries. However, the ribs are also good with rice or cous cous alongside for soaking up the sauce.

Cut the racks into segments of 2 or 3 ribs. Sprinkle with salt and pepper and allow to rest at room temperature for 30 minutes.

Heat the oil in a deep skillet. Fry the 2 peeled garlic cloves, the bread and sprig of parsley. Remove when garlic and bread are golden.

In the same oil, brown the lamb riblets. With the side of a knife, crush the unpeeled garlics. Add them to the pan with the ribs.

Add the paste to the ribs with the water and ½ teaspoon salt. Cover and simmer until the ribs are fork-tender, 30 to 40 minutes. Serve hot garnished with chopped parsley.