CHARD--TWO FOR THE PRICE OF ONE

Chard is such a satisfying vegetable because, with the leafy green tops and substantial stems, it adds up to much more than spinach. In Spanish dishes, often the green tops and white stalks are cooked separately. Two for the price of one. 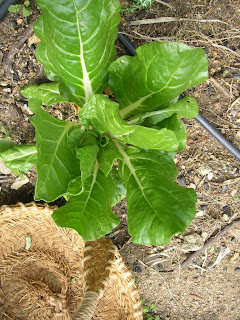 I grow chard (also known as Swiss chard or white beet, acelga in Spanish) in the garden from autumn through to spring. It’s a good veg to have on hand for soups, stews and stir-fries. Because I pick it so frequently it never gets really big. But the chard I buy in local markets is often huge, with leaves like palm fronds and stems as broad as pork chops.

Leafy green chard tops can be cooked in any way suitable for spinach. Thick stalks need to be stripped, like celery, of strings. Then they can be added to stews (see the recipe for berza) or boiled until tender and then batter-dipped and fried or covered in a sauce and gratineed.

Serve this as a side dish with roast pork, chicken or turkey. Spinach can be substituted for chard.

Heat the oil in a deep skillet and fry the pine nuts for a few seconds until they are toasted. Remove skillet from heat and skim them out and reserve.

Add the garlic to the pan with the tocino, if using. When garlic begins to turn golden, add the chopped chard. Sauté the chard for 5 minutes.

Add ½ cup water, the raisins, salt and black pepper. Cook, covered, for 10 minutes. Remove cover and cook another 5 minutes until most excess liquid has evaporated. Sprinkle with the pine nuts.

My grandson named these “lasagne sandwiches.” They are rather fiddly to make, I think, because the “sandwiches” don’t hold together easily while dredging in flour and egg. I saw a TV chef wrap each package in a blanched chard leaf before flouring. But then, you would not get two for the price of one.

Trim the chard stems of strings and cook them in boiling salted water until tender, about 8 minutes. Drain.

Place 6 pieces on worktop. Spread each with a spoonful of grated cheese. Roll the sliced ham and lay it along each chard stem. Top each with another piece of chard and squeeze the edges together slightly, sandwiching in the cheese.

Place the flour in a shallow bowl. Place the beaten egg in another bowl. Dip the pieces of chard first in flour, then egg, then again in flour.

Heat sufficient oil to cover the bottom of a skillet to a depth of ¼ inch. Fry the floured pieces of chard until browned on both sides.

Drain briefly on paper toweling. If desired, cut the pieces in half. Serve hot.