SALMOREJO--IS IT A DIP? A SAUCE? GAZPACHO?

It’s sweltering hot in southern Spain right now. With the first day of summer and the solstice madness of the San Juan festival, it sure seems time for some cool gazpacho. Except I’m loathe to break my own rule—to make gazpacho only with home-grown tomatoes, which are still weeks away. Instead, I’m enjoying some “pre-gazpacho”—salmorejo. Salmorejo is made with more or less the same ingredients as gazpacho—bread, garlic, olive oil, vinegar and tomato—but the proportions are different. More bread, less tomato, no water to thin the puree. I call it  “gazpacho cream.”

Salmorejo is famous in the tascas of Córdoba, where it’s usually presented in individual ramekins to be eaten with a spoon. Garnished with strips of serrano ham and chopped egg, it serves as a starter, instead of soup, instead of salad, a gazpacho place-holder. A very similar preparation in the town of Antequera (Málaga) is called porra and is a rustic country dish made in an olive-wood bowl.

Salmorejo is thick enough to serve as a dip. I like to serve it in a bowl accompanied by raw vegetables and breadsticks as dippers. Salmorejo also makes a sauce—spoon it over grilled fish or chicken—or a salad dressing.


Use good country-style bread with a dense crumb as the base for salmorejo. It should be at least a day old. In fact, salmorejo is a great way to use up stale bread. It’s easier to process the bread if it’s first soaked in water to soften it. Squeeze it out really well. The finished cream should be the consistency of thick mayonnaise. 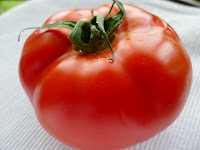 Cut the bread into chunks and put in a bowl with water to cover. Let soak until softened.

Cut the peeled and seeded tomatoes into chunks and place in a food processor bowl with the garlic. Process until puréed.

Squeeze out as much water as possible from the bread. Add the bread to the processor bowl. (If necessary, process in two batches.) Process until smooth. With the motor running, slowly add the oil, salt and vinegar to make a thick cream. Chill until serving time.

If serving as a dip, spread the cream in a dish and garnish the top with strips of ham and sliced egg. As a starter, serve the cream in individual ramekins or small bowls, each garnished with ham and egg. 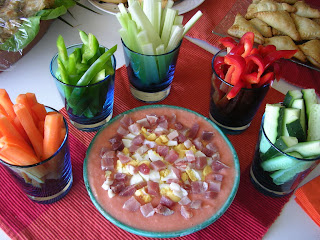