Flan, that sweet, golden custard resting in its little pool of dark caramel sauce, is as Spanish as sunshine. Flan really comes into its own in the spring, especially during the Easter season. That's because, in the spring, cows, goats and ewes give an abundance of milk. Hens are laying. What better way to use up the season's bounty than to turn it into luscious custards?

Classic flan calls for whole cows' milk infused with lemon zest and cinnamon stick and bound with whole eggs. Individual custard cups are coated with caramel before being filled with the custard mixture. The cups are set in a baking pan partially filled with boiling water. After baking, the flans are allowed to cool and are unmolded immediately before serving. Baking liquidizes the caramel, which spills over the custards when they are unmolded. Flan should be firm enough to stand unsupported, but just a little wobbly.

When making caramel to coat the molds, I use a light-colored pan, so I can watch the sugar changing color. As the water cooks off, the sugar bubbles into a thick syrup, then begins to turn gold around the edges. Rather than stir,  tilt the pan to mix it. It’s ready when the syrup is a dark gold, not brown. This takes about 6 minutes.

Then, work quickly and pour into the flan cups. The caramel hardens almost immediately. If it sets up too quickly, set the pan back on the heat until it melts.

To clean the pan after making caramel, partially fill it with water, bring to a boil, put the lid on and let boil one minute. Remove from heat, leaving the lid on. The steam will clean the sides of the pan.

The flans need to bake very gently, so set the cups in a pan partially filled with hot water.

The traditional flavoring for flan is lemon zest and cinnamon stick, infused with the hot milk. Or, use instead a vanilla bean, or a combination of orange zest and a favorite herb (rosemary or bay leaf, for example). In this version, I have used saffron in place of cinnamon, lending a very subtle aroma and a sunny  yellow color to the flans.

Place ½ cup of sugar in a small heavy saucepan with 3 tablespoons of water. Cook until sugar melts and turns a dark gold. Quickly pour the syrup into the custard cups, tilting them to cover the bottoms.

Combine the remaining 1 1/2 cups of sugar with the milk, lemon peel and saffron in a saucepan. Place the beaten eggs in a bowl.

Heat the milk until sugar is dissolved. Whisk the hot milk  into the eggs. Pour the milk and eggs through a strainer into a heat-proof pitcher. Discard lemon peel.

Divide the custard mixture between the custard cups, filling each about 2/3 full. Set the custards in a pan and add boiling water to half the depth of the cups.

Bake the custards until set (a thin skewer comes out clean), about 1 hour. Cool, then refrigerate.

Immediately before serving, dip the bottom of each custard cup in hot water. Loosen the custards with a knife and invert each on to an individual dessert plate. 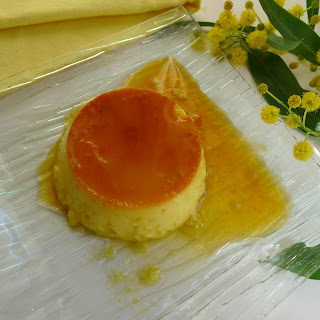