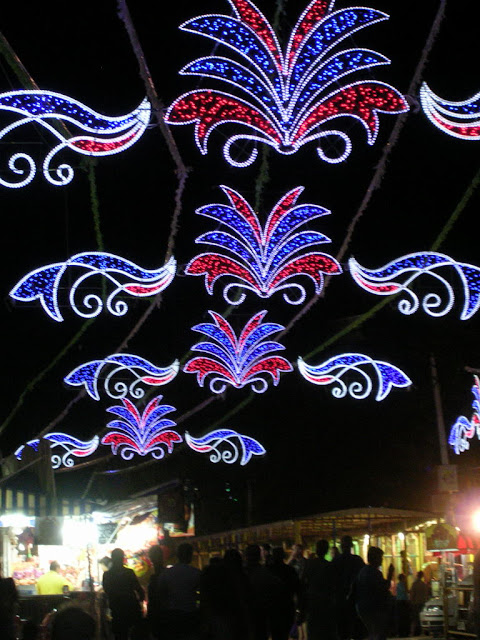 A village feria is a party on a grand scale, usually accompanied by fun-fair rides, sports competitions, cultural exhibitions, feasting. And round-the-clock partying.

In my village, the feria happens early in September, in honor of the Virgen de la Peña, the Virgin of the Rock, so-called because the image was discovered in a stone grotto on the edge of town. Baby girls are named in honor of the patron, so lots of girls in town are called Peña--Rock. If I had had a girl child, I might have named her "Rock".

When the village was poor, people saved all year to be able to splurge on special treats during feria--a night out with bottles of fino Sherry, grilled shrimp and roast chickens; bars of sweet almond nougat; dancing till dawn; flamenco shows; rides for the kids. Now, people have more money, but they still do it all, buying chucherías, sweet treats, for the peques, small children, and grown-up treats for themselves.

Feria food is street food. Year after year the same rotisserie chicken people set up their stand. A burly guy sets up a wood-fired grill producing spicy pinchitos, little kebabs. (There is a recipe for pinchitos here.)

At another stall, potato chips are made fresh, fried in deep vats of oil. This year, the Greens Party has a bar selling brochettes of organic vegetables! At the end of a long night of partying, it’s traditional to finish with a “breakfast” of churros y chocolate, deep-fried crullers served with thick hot chocolate.