TOOLS AND TECHNIQUES OF THE SPANISH KITCHEN 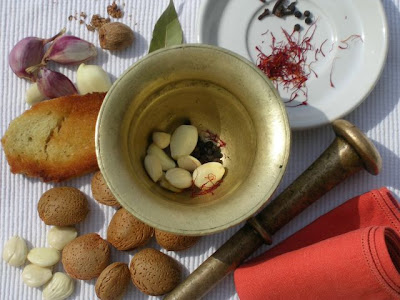 Ferran Adrià, the Picasso of modernist cuisine, plays with gelification, liquid nitrogen, foams, smokes, what he terms “techno-emotional food”. Delicious is sometimes beside the point. It’s all about thrill, excitement, creativity. And technique. Dinner as high art.

That’s what I wrote about for the new website, Foods From Spain. These traditional techniques include roasting, grilling and emulsions (just imagine the culinary wizardry—as amazing as any technique in modern cuisine—required to invent mayonnaise. Who could imagine that olive oil stirred, drop by drop, into egg yolks would thicken and expand in volume, creating a luscious, creamy sauce?) Frying in olive oil, marinades such as escabeche, slow-cooking in the olla are other traditional techniques. (Read all of them  here)

And, from the traditional kitchen—the mortar and pestle. Here’s what I wrote about this technique—plus a wonderful recipe for chicken in pepitoria, a sauce of almonds and saffron.

The most basic utensil in the traditional Spanish kitchen is the mortar and pestle. Of weighty granite or marble, of gnarled olive wood or shiny brass, the mortar holds pride of place on the kitchen shelf. Before the advent of electric blenders, it was a tool in daily use, the starting point of many recipes.

The tool is the technique—a  few peppercorns, garlic, a wisp of saffron are crushed in the mortar and added to a simmering stew. Here is where flavor begins.

Each region has developed distinctive recipes using the mortar. Andalusia has its ajo blanco, cold almond soup, and chicken in pepitoria sauce. La Mancha has morteruelo, a sort of pâté. Catalonia has romesco sauce and picada, a ground nut mixture for flavoring fish stews, chicken and meat dishes.

Andalusians favor the almirez, a small brass mortar and pestle. So beloved is the sound of the almirez that it is used as a rhythm instrument in traditional folk music.

In a collection of recipes from Málaga, the gastronomic writer Enrique Mapelli recounts how making ajo blanco was a summertime ritual. Village women would sit in their doorways with the almirez, pounding garlic, almonds and bread to a smooth paste. Olive oil beaten into the paste created a thick emulsion, to be thinned with vinegar and cold water and served with sweet moscatel grapes.

Many cooked dishes also required the almirez. A standard preparation, used for fish, poultry and meat, begins with frying until crisp a slice of bread, a few almonds, and a clove or two of garlic. Next, small hard ingredients—a few peppercorns, a single clove, a few threads of saffron—are ground in the brass mortar. Then, the fried bread, almonds and garlic—plus a clove of raw garlic, for subtle variations in flavor—are added to the mortar and “processed” to make a paste. Diluted with white wine, the mixture goes into the cazuela where chicken or meat has been browned. The mortar mixture creates the sauce, known as pepitoria, both thickening and seasoning it.

Catalan picada sauce, used to flavor suquet, a seafood stew; rabbit dishes, and a sumptuous surf and turf dish of chicken and lobster, is prepared in a large granite mortar. Almonds and sometimes pine nuts or hazelnuts are crushed with garlic, parsley, bread and a pinch of chile pepper. Sometimes the picada is thickened with the fried liver of fish, rabbit or chicken. Pounded chocolate adds a mysterious background flavor to the mixture.

A mortar is also essential for preparing the famous Catalan romesco sauce. Dried sweet peppers called ñoras are ground up with hazelnuts and garlic, sometimes roasted tomatoes, then olive oil is beaten in to thicken the sauce.

The morteruelo of La Mancha is a traditional way of preserving pork liver and game birds. After a matanza, hog slaughtering, the liver was cut into pieces and fried, then mashed in the mortar. Combined with bread for thickening, pieces of chopped partridge and cinnamon and caraway seeds, it was simmered until very thick, then packed in pots to keep in a cold place. 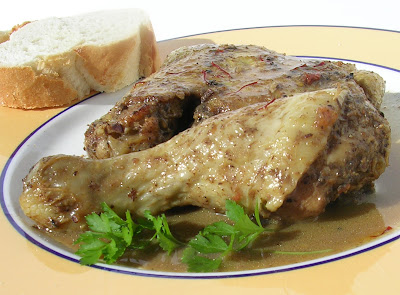 Rub the chicken pieces with salt and pepper, then dredge them with flour. Shake off excess.

Heat the oil in a skillet and fry the almonds, 4 cloves of garlic and bread slices until they are golden. Skim them out and reserve.

In the same oil, brown the chicken pieces very slowly on all sides. Remove chicken to a cazuela. Add onion to remaining oil and sauté until softened.

In a mortar, grind the clove, peppercorns and saffron with the salt. Mix with 1 tablespoon of water. In a blender, place the fried garlic, 2 cloves of raw garlic, almonds, bread, parsley and some of the wine. Blend to make a smooth paste. Blend in the spice mixture.

Add the mixture from the blender to the onions with the remaining wine and broth. Bring to a boil, then pour over the chicken pieces.

Cook the chicken slowly until tender, about 2 hours, stirring occasionally. Add additional broth if sauce is too thick.

Mash the egg yolks with the lemon juice and a little of the sauce and stir into the casserole to thicken the sauce.

Serve the chicken garnished with fried slivered almonds and triangles of fried bread.
Posted by JANET MENDEL at 10:01 PM