By 8 pm, early for Madrid, I was ravenous. Three of us ducked into a neighborhood bar near where I was staying with friends in the Ventas district of Madrid. Glasses of red wine were set before us and, without asking, a plate of lacón, sliced cured and cooked pork, sort of like picnic ham, drizzled  with a little olive oil and pimentón (paprika). Though I never saw the name of the bar, my guess it was El Gallego—the guy from Galicia—because lacón is such a signature dish of that northwest region. The evening’s tapa-hopping would take us on a virtual tour of Spain’s regions, with a stop in a La Rioja wine bar and on to a standard-bearer for Andalusia. 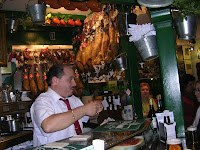 Billing itself as an Andalusian taberna, El Rincón de Jaén (with five different bar-restaurants in Madrid) specializes in shellfish and ibérico ham. Within minutes of ordering red wines, a plate heaped with fritura mixta, mixed fish fry, with rings of calamari, small, fresh anchovies and a few shrimp was set before us. Piping hot, it was as delicious as anything I’ve eaten back home in Andalusia! We ordered another round of wine and asked for a plate of mollejas. These are sweetbreads, a delicacy of traditional tabernas. Fried crisp on the outside, they were creamy morsels within. The plate came with lettuce, tomato and fried green peppers. 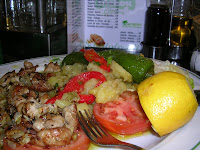 The next evening found us in the up-scale barrio of Salamanca, full of sophisticated shops and bars and restaurants. We selected Sula, the Madrid beachhead of chef Quique Dacosta, he of two-starred El Poblet of Denia (Alicante), in collaboration with Joselito ibérico hams from Guijuelo (Salamanca). (This gastrobar recently got a mention mention in the New York Times’ travel pages.)

Trendy, modern decor sets Sula apart from tipico tabernas, but, surprisingly, the tapas barely wink at the avant-garde. The soldaditos de Pavía, puffy, batter-fried salt cod, crisscrossed with strips of red pimiento, were classic renditions of this Sevilla bar tapa. We didn’t order the house specialty, exquisite ibérico ham (truth be told, we were getting lashings of it at the tasting stands of Madrid Fusión gastronomy conference). Instead, we sampled two cuts of fresh ibérico pork, secreto and solomillo, each grilled and served atop bread. The secreto was, frankly, chewy; the solomillo, or tenderloin, was melt-in-the-mouth tender. These we chose as part of a six-plate deal for €13.65 (about $18.60) that also included, asparagus tempura and mini chicken burgers with caramelized onion relish (yum) and pisto (similar to ratatouille; see the recipe below) with fried quail’s egg. I ate the quail’s egg in one bite, but the other tapas we shared. With a lovely Garnacha wine, our tapas supper was much enjoyed. 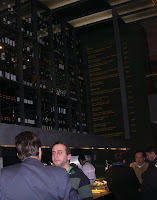 Sula flips the “cellar” concept on its head—racks holding 4000 bottles of wine aren’t cellared, but soar to ceiling height (the restaurant is on the upper level).  Sula is at Calle Jorge Juan 33, Madrid.

On Day 4, we were off to a tapas event at the Mercado San Miguel, a market right next to Madrid’s grand Plaza Mayor, where stalls proffer meat, fish, fresh produce, bread, pasta, oysters, wine and tapas. On the way there, we stopped off at Lhardy, a Madrid institution. Not actually a tapas bar, it’s a delicatessen and high-class take-away food shop (restaurant above), where a restorative cup of consommé or dainty ham sandwich can be had. We had a glass of red wine with puff pastries filled with chorizo.
Lhardy, Carrera de San Jerónimo 8, Madrid. 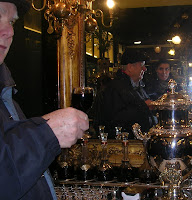 Right on the Plaza Mayor is Casa María, where you can get a tapa or snack from 9 am right through until 2 am, every day of the year. We nibbled ham croquettes and watched waiters carrying bubbling fish stews to diners in the restaurant. Casa María, Plaza Mayor 23, Madrid. 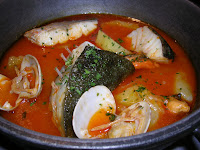 On my last night in Madrid, I declared, “No more tapas.” (Lunches at the gastronomy fair were grazed, on foot, at stands proferring everything from Asturian cheeses, ibérico ham, Castilian garlic soup, Andalusian olive oil, to canapés of sea urchin roe.) I wanted to sit at a table, eat salad, eat a meal with knife and fork. I offered to cook—but first, I had to make a trip to the funky, local market a block away (open late into the evening) to pick up salad greens and a few other groceries. And, wouldn’t you know? Across from the fruit and vegetable stand was a little bar. We joined the locals for a slice of tortilla de patatas, potato tortilla, and a glass of red wine. My last tapa hop—until the next trip.

This is a splendid vegetable dish, that can be served hot or cold. Topped with a fried egg, it’s a great supper dish. For tapas, serve small portions of the vegetables topped with fried quail’s eggs.

Place the cubed eggplant in a colander and sprinkle it liberally with salt. Let it drain for 1 hour.

In a pan, heat the oil and sauté the onion and eggplant for 5 minutes. Add the garlic and green pepper and sauté another minute, then add the tomatoes and zucchini. Sauté on a medium heat another 5 minutes.

Season with salt, oregano, pimentón and pepper. Cover and cook on a slow heat until vegetables are soft, about 20 minutes, stirring frequently so vegetables don’t scorch. The mixture should be juicy, but not soupy.

Serve hot or cold, garnished with chopped parsley. If serving cold, add a touch of vinegar.
Posted by JANET MENDEL at 12:42 AM